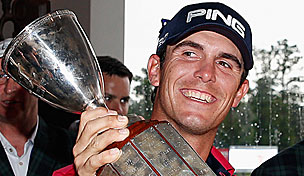 AVONDALE, La. – The longest 52 minutes of Billy Horschel’s life were spent mostly in a brown leather chair in the player lounge at TPC Louisiana.

Awkwardly, Horschel and Matt Every – his friend and former teammate at Florida – watched highlights of the final round of the Zurich Classic. He was 278 yards away from clinching his first PGA Tour title – something he guaranteed he would do this season in an on-air interview last December – when play was suspended because of inclement weather.

Chin in his left hand, Horschel poked around on Every’s iPhone, perusing an email of his friend’s new house plans. That distraction complete, he watched the coverage and critiqued each featured shot. Of course, there wasn’t much to complain about – to that point, Horschel had made eight birdies, including a 4-footer on 16 that nudged him one shot ahead of D.A. Points.

Every so often, CBS would cut to a shot of Horschel, watching himself on the 16-inch Sony TV, but on a 22-second delay. “This is my first time on TV this year,” Every cracked.

The weather-plagued final round finally resumed at 5:27 p.m. local time. Horschel was in the left rough on the par-5 18th, with a one-shot lead, with a steady rain falling, with a pond looming to the right if he fanned his first competitive shot in nearly an hour.

An uber-agressive and confident player – more on that later – Horschel instead went the conservative route after an errant drive, laying up with a 9-iron and wedging to 27 feet. It took him but a moment to see the read on his putt. “If this is my time,” he told himself, “then this putt needs to go in.”

The putt found the bottom of the cup – his ninth birdie of the day, for a final-round, 8-under 64 and one-stroke victory at 20-under 268 – and he simply lost it.

He furiously pumped his fists, the emotion of three consecutive close calls pouring out. He crouched on the green, hands behind his head, and let the roars overwhelm him. Points, now relegated to a runner-up, applauded from behind the green. As Horschel walked toward the tunnel behind 18, rain-soaked fans threw beads from the grandstands.

“What’s amazing about Billy is that the belief that he’s got in himself. It knocks out the nerves and anxiousness because he believes in himself so much,” said Chris DiMarco, a former Gator and a mentor for Horschel. “He’s that good. Every time I play with him, I don’t know how he’s not winning every week. This is just the beginning.”

This magical run started in Houston, in late March. In the same group as Lee Westwood on the final day, the 26-year-old outplayed the former world No. 1, finished in a tie for second, and then, most importantly, wrapped up his Tour card for next season. Finally, he wouldn’t have to endure the torture chamber known as Q-School. He could play free, more at ease, confidently. Now, he told his peers, it was going to be “Scary Billy.”

Next came San Antonio, where he slept on a two-shot lead after 54 holes. Final-round pressure can have a bizarre effect on players, however, and Horschel admitted to having Jell-O for legs that day. He shot 71 and never was a factor late (T-3).

Another opportunity presented itself two weeks later, in Hilton Head, but on the weekend he played the last two holes in 5 over, eventually finishing T-9.

“I’ve always felt like I was good enough to win out here,” he said. “I just felt like I had to check every box first.”

Throughout the journey Horschel has been genuine and brash, borderline cocky, a human highlight reel of emotion. It was glorious theater.

“It used to be kind of a fake confidence, but now it’s real,” Every said. “You can say that you’re confident and believe in yourself, and the stuff he’s been saying in the media might rub people the wrong way, but he really believes he’s that good.”

Followers of Horschel’s career might notice a pattern. His incredible consistency was reminiscent of his time at Florida, when he seemingly found himself inside the top 10 in every tournament he entered. When he turned pro, the start to his promising career was delayed by a wrist injury that eventually required surgery, a psyche that was too fragile.

But in those college and amateur events, Horschel learned quickly that he liked playing from behind and hunting the leader. The chase narrowed his focus; it sharpened his precision.

And that’s exactly what he faced in the final round here, where he trailed Lucas Glover by two strokes after a Saturday 66.

“This whole week,” Horschel said, “I felt like I’m going to get my first victory here.”

But when play was suspended Sunday for the first time, he found himself one under after six holes and one shot behind. Upon the restart, he ran off six birdies in a row, matching the longest streak on Tour this season, and reached 19 under par.

That’s fair to say – Horschel has made a Tour-best 220 this season.

None, however, proved bigger than his 27-footer on the 72nd hole, when Points was 4 feet from a playoff. Alas, after Horschel’s dramatics, it was rendered a mere footnote.

Said Fowler, “It’s about damn time. He’s too good of a player not to be out here playing and being in contention.”

Indeed, and Horschel would agree – it was well worth the wait.