Payne hopes for one set of rules on anchoring 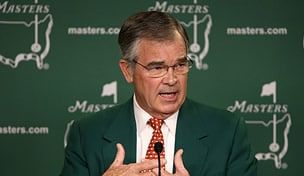 AUGUSTA, Ga. – What will the Masters do if anchored strokes are banned by the USGA and the Royal & Ancient Golf Club?

Augusta National Chairman Billy Payne was not ready to reveal that in his news conference Wednesday at the Masters, but he said what he would like to happen.

“Given the fact that the ruling bodies have not yet declared a decision following that open comment period, I do think it would be inappropriate for us to express an opinion, other than to say that we hope and believe that they can reach a common ground so that golf will continue under one set of rules,” Payne said.

The USGA and R&A proposed a new definition of a stroke in November that essentially outlaws anchored putting and other anchored swings. The USGA and R&A are reviewing whether to implement the rule. The PGA Tour and the PGA of America have come out opposed to the proposed ban on anchoring.