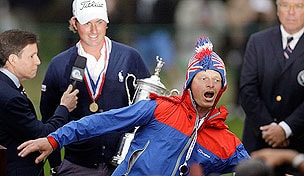 As NBC’s Bob Costas was interviewing newly crowned champion Webb Simpson, a mysterious man wearing a Union Jack hat, started crowing like a bird. Costas and Simpson were looking oddly at the man when U.S. Golf Association chief Mike Davis jumped into the picture and forcefully pulled the man out of the way.

Simpson was impressed with Davis’ cat-like movements and called it a “10 out of 10.” He also said that he had no clue what was going on.

“He appeared in front of me and I didn’t know if it was part of the deal,” Simpson said. “I never won a major, I never know what to expect.

“And I saw some fury in Mike’s eyes. I just kind of laughed.”