SAVANNAH, Ga. – Brad Bryant and Tom Purtzer teamed up for a 12-under 60 to take the first round lead at the Liberty Mutual Legends of Golf championship Friday.

The score was one shot off the course record set in 2008 by Tom Watson and Andy North at the best-ball event at The Club at Savannah Harbor.

''It was a great day,'' Bryant said. ''We played well together. This course just kind of matches our games. There were holes out there where we both had birdie putts.''

The key hole for the leaders was the par-5 seventh. Both players hit into hazards, but Purtzer managed to work his way out and save par from 10 feet.

''That was like making an eagle at that hole at that time,'' Bryant said.

Michael Allen and David Frost, Kenny Perry and Russ Cochran, Jeff Sluman and Brad Faxon, Bruce Fleisher and Tom Jenkins all were two strokes back at 62.

Fred Couples teamed with Jay Haas for a 9-under 63. Also at 63 were Andy Bean and Chien Soon Lu and Joey Sindelar and John Cook.

Cook wowed the Champions Tour fans when his approach to the 457-yard 18th bounced into the cup for an eagle.

Allen and Frost made birdies on seven of the first eight holes.

''It's not something you really plan,'' Frost said. ''Things just kind of worked out that way. I think 10 under is very good, but we maybe could have been a couple more (under).''

Despite the birdie-fest, pars can be crucial in this best-ball format, too.

Perry felt the key to his team's round was a 15-footer Cochran made to save par at No. 3.

''It kept us from having a bogey on the card,'' Perry said.

Perry is still bothered by a putt he missed here last year when David Eger and Mark McNulty won the event after Perry and then-partner Scott Hoch missed short par putts on the second playoff hole. Eger and McNulty closed at 11-under 61 to match Perry and Hoch at 27 under.

''That's still kind of burning in my gut,'' Perry said. ''That ran through my mind on the first putt today. I thought, 'Gee, I don't want to leave this short.'''

Allen, who won the Encompass Insurance Pro-Am last week for his second Champions Tour title, said he didn't have much time to prepare for this event.

''I think whenever you've played well the week before, you want to make sure you’re kind of still focused,'' Allen said. ''I was a little anxious getting started.''

Tom Kite shot a 3-under 69 on Saturday at Pebble Beach for a share of the lead with Brad Bryant after the second round of the First Tee Open. 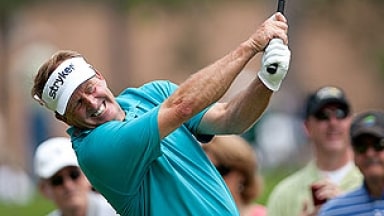 Tom Lehman and Fred Funk share the lead at 9 under after the second round of the Insperity Championship in The Woodlands, Texas. Brad Bryant and Michael Goodes are one shot back. 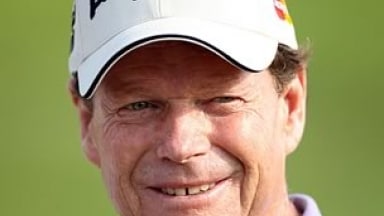 Dan Forsman fired a second-round 65 to take a two-shot lead over Tom Watson, Jeff Sluman and Brad Bryant at the Mitsubishi Electric Championship at Hualalai.