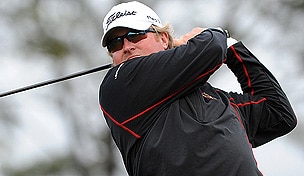 SCOTTSDALE, Ariz. – Tiger Woods walked off Torrey Pines’ South Course after winning the Farmers Insurance Open on Monday and was almost immediately asked about stumbling home, his back-nine 39 resulting in “only” a four-stroke victory after leading by eight at one point in the day.

Woods didn’t mince words when asked about the root cause of why it took three hours and 51 minutes to complete 11 holes.

“The group ahead of us was a hole behind most of the entire back nine,” he said. “I don't know if they were warned or not or they were timed, but we were just playing slow. We were just having to wait on every shot.”

The group ahead consisted of Brad Fritsch, Erik Compton and Steve Marino.

“Nobody ever even approached us,” he said. “I tell you what, all we ever heard on the Web.com Tour was, ‘We’re doing this to you guys now, because it’s worse out there in terms of them getting on you and staying on you.’ We didn’t see anybody all day.”

Fritsch explained that a major part of the problem was the way the final round had continued, with a logjam of players already on the same holes.

“You know, there were two groups starting the day on No. 8, so right away you’re waiting,” he added. “When we walked up to the ninth tee, there was a group just walking off. So it was just a jam with how the round ended – two groups finished 7 and two groups finished 8 the night before, so that’s going to happen at the start. But it was definitely us at the end.”

The issue was exacerbated late in the day, when Marino needed a lengthy ruling on 17 and Compton needed one on 18, eventually taking two drops.

Fritsch was quick to absolve himself from blame when questioned about the situation.

“All I can say is if you watch me, the whole day I had my arms folded on the back of the green,” he said. “There were definitely about three times where there were rulings and second opinions – especially on 17 and 18, that’s where most of it happened. I hate to be the one saying, ‘It wasn’t me,’ but it wasn’t me.

“I try to ask as many people as possible, ‘Is it me? Am I slow?’ I try to pay attention to my routine and how fast or slow I go. I’m pretty sure if you just watch, it wasn’t me.”