Jobe trying to make most of medical exemption 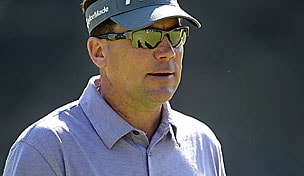 It only seems that way.

Jobe did not arrive at Riviera Country Club in an ambulance for Thursday’s first round of the Northern Trust Open, and he doesn’t have a medic on his bag this week, but given the physical messes he has been forced to clean up to save his golf career, those might not be bad ideas.

Frankenstein would have been less qualified for a PGA Tour medical extension.

Still, here is Jobe, at 47, fighting the good fight at Riviera with a first-round 5-under-par 66. He’s sitting on the leaderboard just behind the leader, Matt Kuchar, who opened with a 64.

There’s a long way to go this week, but Jobe’s happy just to be in this position.

“The body can only make so many golf swings . . . until something falls apart,” Jobe said. “That’s kind of what’s happened.”

Some gifted surgeons have managed to keep Jobe’s body together.

The most well-known of Jobe’s physical woes isn’t for the squeamish. Back in '06, he’s guy who was vigorously sweeping out his garage in Dallas when the plastic and steel broom handle snapped. In a moment, the tips of two fingers on his left hand were gone, sliced off by the jagged edge of the shattered broomstick. He scrambled to pick them up off his garage floor, stuffing them on ice in a plastic container and racing to the hospital for surgery, where doctors sewed the fingers back on.

Way back before that, in 1990, Jobe had his left shoulder reconstructed.

In '03, he broke the hamate bone in his left hand, requiring another surgery. A year after that, he broke it again.

In '07, he tore up his left wrist, requiring two more surgeries.

Last year, he had two procedures on his neck to alleviate a herniated disc, and he missed the second half of the season. He thinks he hurt his neck watching his son’s Little League baseball games.

“I was watching my son play baseball all day, eight hours,” Jobe said. “I woke up the next morning locked up.”

Somehow, some way, Jobe perseveres. He has played about nine full seasons on the PGA Tour between all these physical challenges. He made it to the Tour Championship one year, but he hasn’t won on Tour. Four times he finished second.

This quick start at Riviera means a lot to Jobe, who is playing this year on another medical extension. To keep his exempt playing privileges, he must make $303,178 in 10 events. This is just his second event of the year. He missed the cut at the Farmers Insurance Open last month.

“I would love to have a good week and get this thing wrapped up in the beginning and be able to move on and have a normal life out here,” Jobe said of retaining his status. “The reality is, you really have to take it one day at a time. I’ve been out here long enough to know it’s not the end of the world if you have a bad day.”

There is some good mojo here working for Jobe. He played at nearby UCLA, helping the Bruins win the national title in '88. While at UCLA, he estimates he played Riviera a couple hundred rounds. He even confessed to having jumped the fences here to sneak into the L.A. Open.

“We used to watch Corey Pavin play, and Dave Edwards,” Jobe said. “So it’s been a long time out here.”

Jobe hopes there’s some magic waiting for him at Riviera this year.