Snedeker's bogey-free 64 leads Scott by one 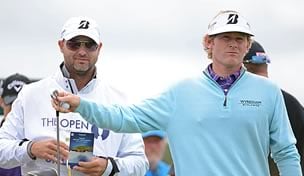 With many of the other contenders faltering around him, Brandt Snedeker played bogey-free again Friday in a record-tying performance that gave him a one-shot lead over Adam Scott in the 141st Open Championship.

Despite missing the cut in his previous three appearances in golf’s oldest major, Snedeker has acquitted himself quite well through two rounds at Royal Lytham & St. Annes. His second-round 64 left him at 10-under 130, which tied Nick Faldo’s 36-hole scoring record at the Open.

“I really love playing golf over here,” Snedeker said, “even though my record is not very good at all.”

Only three players are within five shots of the lead.

One of those guys is Tiger Woods.

The 14-time major winner holed a bunker shot on the 18th to shoot a second consecutive 67.

The 36-hole cut fell at 3-over 143. Tom Watson, 62, made the cut on the number, as did Lee Westwood, Rickie Fowler and reigning PGA champion Keegan Bradley.