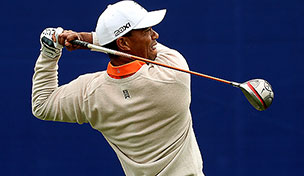 SAN DIEGO – One week after he began his year by missing the cut, Tiger Woods didn't notice a big difference in his game.

It was everything else about the opening round at Torrey Pines that changed. Relatively calm conditions. Rough that didn't cover the top of his shoes. A course that has been good to him since he was a teenager. And despite his putter not cooperating at the end of his round, a 4-under 68 on his scorecard.

Woods was on the verge of joining defending champion Brandt Snedeker and K.J. Choi atop the leaderboard Thursday in the Farmers Insurance Open until missing three straight putts inside 12 feet late in his round.

Snedeker was bogey-free on the North Course for a 65. Choi birdied three of his last four holes on the tougher South Course for his 65.

Woods, a seven-time champion at Torrey Pines, at least got off the South Course without further damage when he had to lay up on the par-5 18th hole, hit wedge over the green and into a bunker and made a 6-foot putt for par.

Woods three-putted for double bogey on the fourth hole, though he knew he had a pair of par 5s to make up ground. He did that, and more. He made a 12-footer for birdie, an eagle by holing a bunker shot on the par-5 sixth, and birdie putts on the eighth and ninth holes to get back into the game.

''I made a few mistakes out there, but I made some nice plays as well,'' Woods said.

Phil Mickelson had quite the taxing day with a 72 on the North, which played about 1 1/2 strokes easier than the course that hosted the U.S. Open in 2008.

Snedeker already is developing quite the love affair with this municipal course along the Pacific Bluffs. As a rookie, he was 10 under through 10 holes and had to settle for a 61 on the North Course. He finished third that year. Then, he rallied from seven shots behind in the final round, got into a playoff when Kyle Stanley made triple bogey on the 18th and won on the second playoff hole.

One year later, he was right back at it.

''It's funny, you look at all the golf courses I should play well on, this should not be one of them,'' Snedeker said. ''This is a long, difficult golf course with lots of rough and hitting a lot of iron shots. My strength is driving and putting, so it doesn't really add up well around here. But for some reason, it's been good to me.''

It was even more of a mystery for Choi.

He is not a regular at Torrey Pines and decided not to come last year until he heard from his host family in San Diego that the South Korean community wanted to see him play. Choi put on quite a show. He finally got some height and spin into shots while warming up on the range, and he converted that into the best round on the South.

He ran off five birdies in a six-hole stretch on the back nine - he started on No. 10 - and no shot was more pleasing than a wedge into a light crosswind on the 15th hole that settled inches from the cup.

''Best shot ever on the South Course – ever,'' he said, grinning.

Of the eight players at 66, only Josh Teater posted his on the South Course. Of the PGA Tour events that use multiple courses, few of them are as different as the South and North at Torrey Pines, although the difference in scoring average has been greater in recent years.

Charles Howell III summed it up best after his 66 on the North.

''The real one is tomorrow,'' Howell said.

Howell lost in a playoff last week in the Humana Challenge, and he started his season with a tie for third at the Sony Open. Whatever disappointment he felt in the California desert, he was able to shake off quickly. And he wasn't alone.

Scott Stallings lost a five-shot lead in the Humana Challenge and bogeyed the par-5 closing hole to miss the playoff. He bounced back with a 66.

And there was Woods.

He started his season by missing the cut in Abu Dhabi when he was docked two shots at the end of his round for a rules violation on the fifth hole. He was on more comfortable territory at Torrey Pines, though he says he didn't hit the ball much differently.

He missed birdie putts of 8, 15 and 12 feet on the back nine, along with two par putts from inside 8 feet.

Woods now goes to the North Course to figure out where he is before anyone can get a true sense of how this tournament is shaping up.

''I think he's won here more times than I've won on Tour, so I think he knows the place pretty well,'' Snedeker said. ''I think he's very similar to me. He loves putting on these greens. ... We've got three more days to go. There's 155 guys I'm still worried about besides him, so we have a lot more guys to worry about.''

Woods played with Rickie Fowler, who had a 77 and was tied for last place.

Mike Weir was among those who had a 66 on the North Course and appeared to be in great shape to make his first cut since 2011.

Mickelson's 72 felt even higher considering he was playing with Snedeker, who was firing at flags and holing his putts. A three-time winner at Torrey Pines, his week began with comments about the amount of taxes he is paying in California, followed by two rounds of apologies for not keeping his opinions to himself.

That wasn't a problem for him Thursday.

''I've been playing better than this, and there's no excuses,'' Mickelson said. ''I've got to get my head a little bit more focused on the shots, and I haven't been as focused starting out. Hopefully, I'll be able to turn that around tomorrow and start a little bit more effectively in the future.''