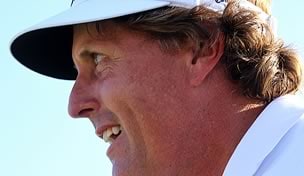 Getty Images
DORAL, FL - MARCH 10: Dustin Johnson waves to the gallery after a birdie on the second hole during the first round of the 2011 WGC- Cadillac Championship at the TPC Blue Monster at the Doral Golf Resort and Spa on March 10, 2011 in Doral, Florida. (Photo by Mike Ehrmann/Getty Images)  -

Phil Mickelson is scheduled to meet with the media on Wednesday at Torrey Pines, a Q&A that promises to be lively following the left-handers comments on Sunday at the Humana Challenge regarding taxes in California. But if a study of California’s state tax code is any indication, Lefty should have more questions for his accountant.

“If you add up all the federal and you look at the disability and the unemployment and the Social Security and the state, my tax rate is 62, 63 percent,” Mickelson said. “So I've got to make some decisions on what I'm going to do.”

That estimate, however, may be a little high according to Jeff Schreiber, a San Diego-based tax attorney, who figured Mickelson’s combined federal and state tax bill will be closer to 53 percent “depending on his Schedule A deductions.”

“What he is talking about is the increase in the Federal rate for those who make over $450,000 and California’s increase on wealthier individuals,” Schreiber told GolfChannel.com. “He can go up 3, 4 percent in state taxes. He’s also talking Federal Medicare taxes and all the taxes one can have on his paycheck.”

All total, that is 57.9 percent of Mickelson’s income, but state income taxes and a portion of the payroll tax are deductible from his federal tax bill, which would reduce his total taxes by about 5 percent and lower his total taxes to about 53 percent, not 62 or 63 percent.

“That would be high,” Schreiber said. “It will be a total increase of about 8 percent over what he paid before.”

According to a recent Forbes magazine article, Mickelson is the seventh-highest paid athlete in the world with $4.8 million in earnings (not including the $1 million he earned for finishing fifth in the 2012 FedEx Cup, although much of that is deferred income) and $43 million in endorsements ($47.8 million total).

It seems likely the “drastic changes” Mickelson referred to at the Humana Challenge is moving somewhere that doesn’t have state income taxes. Nine states do not have income taxes, including Florida and Texas.