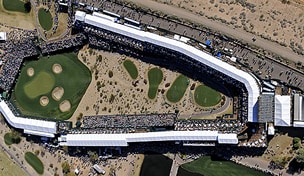 The raucous magic that is the 16th hole at TPC Scottsdale produced numerous viral buzzes this week, but the best of the bunch, with apologies to James Hahn who likely became the first player in PGA Tour history to celebrate a birdie Gangnam Style, was the brothers Henley.

Brent and Kip Henley caddie for Robert Garrigus and Brian Gay, respectively, and were paired together in Round 3 at the Waste Management Phoenix Open. After Ryan Moore, the third player in the group and last to play, teed off on the par-3 16th, the Henley brothers darted toward the green as part of the unofficial caddie race.

Brent tripped about 30 yards short of the green, and Kip won the sibling dash, although when GolfChannel.com spoke with the looper early Monday on his way to this week’s event at Pebble Beach, he jokingly said he was still recovering.

Kip also pointed out that despite the attention the races have generated, TPC Scottsdale’s 16th is a unique atmosphere for this type of break from tradition.

“I want it this week only. It’s the coolest hole on the PGA Tour every year,” he said. “But I’m only glad it happens one time a year.”

Caddie races have been a tradition at Colonial’s 13th hole since 2000 and in recent years, at the HP Byron Nelson Championship and Shell Houston Open.