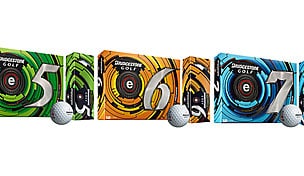 In producing the latest iteration of its distance performance E Series golf balls, officials at Bridgestone say they relied heavily on data they had accumulated through some 200,000 ball fittings with a wide range of golfers. The result, they said, is a line boasting a number of performance upgrades.

For all three models that make up the E Series – the E5, E6 and E7 – the company sought to improve aerodynamics by creating a new dimple pattern featuring six percent larger dimples and two-and-a-half percent more surface area coverage to reduce drag, increase lift and enhance distance. It also reduced the total number of dimples from 330 to 326.

Then, Bridgestone technicians made changes with each ball within the series to give them individual attributes to fit a variety of players, mainly through manipulation of smaller dimples within the larger dimples on the ball covers.

With the two-piece E5, which boasts a large gradational core and a tour-caliber urethane cover, company officials said they created a ball for golfers looking for higher trajectory on shots, as well as one that delivers good feel into and around the green.

As for the E6, which is the only one in the line available in optic yellow, orange and pink, as well as white, it is a softer compression, three-piece product with a Surlyn cover three percent softer than the previous version. This model is designed to produce less spin for those players desiring straighter ball flights and fewer slices and hooks.

And the E7 is best described as a pure distance play. It, too, is a three-piece product with a reactive Surlyn cover, a speed-enhancing core and spin-reducing inner layer, all of which is made to add yards to shots.