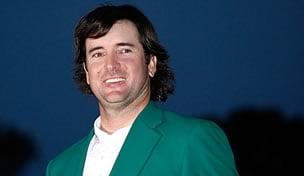 With six weeks until the Masters, defending champion Bubba Watson held a conference call with reporters Wednesday to reflect on the victory and discuss how his life has changed since he slipped into the green jacket last April.

Here are some of the highlights:

• Watson won’t reveal what he is serving at the Champions Dinner until the day after the ceremony. (Last year, Charl Schwartzel had South African barbeque.) “I think as Masters champion I should be allowed to just wait to tell everybody,” Watson said.

• For Bubba, family now comes first. His adopted son Caleb has begun crawling, learning how to clap, giving both Bubba and wife Angie kisses. “I thought golf was my life, then I thought when I got married, my wife was my life,” he said. “And now with my child, it’s my family is my life.”

• His mind-bending shot from the pine straw on No. 10 might have been the most memorable, but Watson said that it was the fourth-hardest shot he hit last year. In fact, Bubba pointed out that his second shot from the hard-packed mud on No. 17 Sunday was a more difficult shot. Also, on the 11th hole on Friday, he hit a big hook from the pine needles that avoided the trouble and kept him in the tournament. At the seventh hole, Watson drew a gnarly lie in the rough, had a 5-foot-wide gap through the trees and briefly considered chipping out, only to take his second shot over the trees and onto the green. “The other ones were difficult,” he said. “Just nobody cared what Bubba Watson was doing those other days or other shots.”

• Bubba doesn’t feel compelled to go back to the scene of his famous recovery on the 10th hole. “That might be my only legacy of winning the Masters,” he said. “So I want that shot to live, and I want it to grow.”

• After winning his first major, Watson said he sought out Tiger Woods, Rory McIlroy, Graeme McDowell, Schwartzel and others to ask about life, post-major victory. The best advice, however, came from his manager, Jens Beck. That tidbit: Golf first. So he’s canceled a lot of corporate outings, turned down many interview requests. “I was Bubba Watson the golfer first before I won,” he said, “so we have to keep it simple and remember that golf first.”