Bubble boys: Who's on the FedEx Cup cut line? 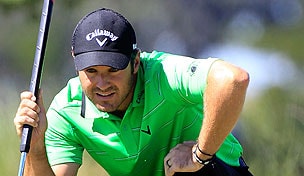 Players hoping to make a final push to reach the season-ending Fedex Cup playoffs have one more opportunity: this week’s Wyndham Championship, which begins Thursday at Sedgefield Country Club in Greensboro, N.C.

The top 125 players on the FedEx Cup points list after the Wyndham qualify for next week’s The Barclays, the first of four playoff events.

Rod Pampling holds the 125th spot heading into the regular-season finale. Starting with No. 126 Brendan Steele, 44 of the next 55 players are in the field this week, meaning there could be much fluctuation in the points race.

Here’s a look at some of the bubble boys – and a few players who have work to do to qualify for the playoffs:

No. 123 Jason Bohn (363): Played well of late, with two top 20s in his past three starts, including a runner-up finish at the True South Classic.

No. 124 Jhonattan Vegas (361): A winner last year at Humana, had a season-best T-4 at the AT&T National in July, then missed two of his next three cuts.

No. 126 Brendan Steele (330): A T-8 in his last start, the Reno-Tahoe, but it’s been a disappointing season for last year’s Valero winner.

No. 127 Retief Goosen (330): The Goose is not playing the Wyndham, so he won’t qualify for the season-ending playoffs.

No. 130 Gary Woodland (321): Beset by injuries and swing change this season, one of 2011’s breakout stars has shown signs of life lately, including an opening 67 at the PGA (eventually finished T-42).

No. 137 John Daly (298): JD was one of the early stories at the PGA, where he eventually finished T-18. Four top-25 finishes in 11 starts this season, including two in a row. Has never made the playoffs.

No. 146 Camilo Villegas (266): Missed the cut in nearly half his starts, and hasn’t finished inside the top 20 since his first event of the season (T-19 at Humana).  A strong record in the playoffs, he was runner-up in 2008 FedEx Cup.