OLYMPIA FIELDS, Ill. – Playtime is over.

In the weeks since the PGA Tour return from hiatus, a few notable trends have emerged. The top stars have shown up with regularity. The back-nine drama, by and large, has been there. Players have made the best of a situation where a lack of fans has zapped the energy that so often fuels the biggest names.

Oh, and the scores have been crazy low.

Were it not for Jon Rahm’s microscopic penalty at the Memorial, each of the 11 stroke-play events since the Tour’s return would have been won with a score of at least 10 under. As it is, the average winning score has been 18 under – a figure that was largely influenced by last week’s Northern Trust, where Dustin Johnson lapped the field and shot 30 under at TPC Boston.

But the scoring took on a decidedly different tone Thursday at the BMW Championship, as Olympia Fields Country Club reminded the field why, exactly, it was chosen to host the 2003 U.S. Open. Warm temperatures baked out the North Course, and steady winds firmed it out. Players had trouble finding the narrow fairways, paid dearly in lush rough with any misses and overwhelmingly had the same description for a difficult day.

When all the scores were counted, only three people out of the 69-player field finished under par on the par-70 layout. Leading the pack was Hideki Matsuyama at 3 under, with Tyler Duncan at 2 under and Mackenzie Hughes one shot further back. Other than that, the Tour’s best and brightest from the 2019-20 season were left licking their wounds during an opening round that produced the fewest players in red figures since four were under par at the 2018 U.S. Open at Shinnecock Hills.

“It was getting close (to U.S. Open conditions). If they could narrow the fairways another five yards, we’d be there,” said Adam Scott after a 2-over 72. “But I’m glad we’re not, because I wasn’t hitting enough fairways.”

“It’s the firmest and fastest I’ve ever played it, I think,” added Alex Noren after matching Scott’s 2-over total. “I mean, it’s fun. It’s good. It’s just, you’ve got to just hit the fairways, hit the greens. Otherwise it’s tricky.”

Further down the leaderboard, there was plenty of carnage. Former world No. 1 Justin Thomas bogeyed four of his last six holes en route to a 73. Daniel Berger, one of the hottest players on Tour since the re-start, joined him at 3 over, as did Tiger Woods and Bryson DeChambeau. It was a 75 for Jon Rahm, 76s for Jason Day and PGA champion Collin Morikawa, and Marc Leishman rounded things out with a 10-over 80.

“I think everyone found it a grind out there,” said Rory McIlroy, who sits in a tie for fourth at even. “The greens were firming up yesterday in the practice round, but that felt like Saturday at the U.S. Open out there rather than Thursday at a PGA Tour event.”

Players can take solace that help is on the way. Overnight rains are expected Friday evening, meaning that much of the bite could be removed by the time the no-cut event reaches the weekend. But a summer of scoring records and dizzying totals, and one week removed from Johnson nearly tying the Tour’s all-time mark for 72 holes, things have taken a decided turn in the Windy City and par is once again a score with some staying power.

“There’s nothing really tricky about it. It’s just hard,” Johnson said. “If you want a golf course to play tough, grow a little rough, make it firm and fast. Every week, every golf course this firm and fast with a little bit of rough plays difficult.” 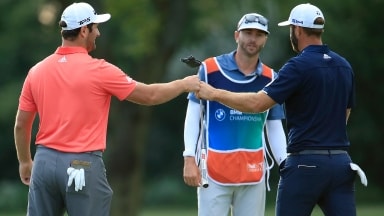 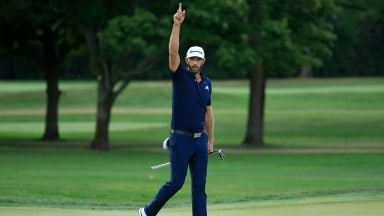 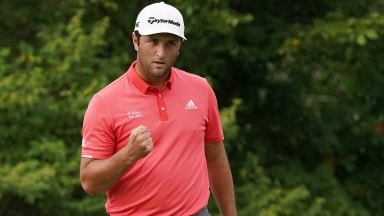