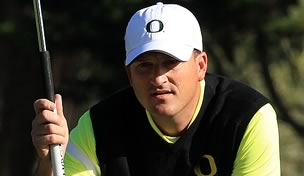 SAN FRANCISCO – Bring up Casey Martin’s name – just mention him in passing – and within seconds the conversation will devolve into a lively debate about … it.

The degenerative right leg. The Supreme Court decision. The cart. The perceived advantage.

It is a topic that exudes talk show gold, providing fodder for the masses even now, more than a decade after a resolution was reached.

That’s because it so forcefully defines party lines. There are those who believe that due to his disability – Martin suffers from Klippel-Trenaunay-Weber syndrome – he was rightly awarded the use of a golf cart in between shots. There are those who feel it was the wrong decision, allowing for an unfair benefit in a sport where endurance is part of the game.

Video: Martin talks about Olympic now and then

For one day – heck, even for just a few minutes – forget your feelings. Put aside any satisfaction you’ve received in watching Martin ply his craft thanks to the Supreme Court ruling. Or suspend your outrage over him being treated differently than his fellow competitors.

Instead, think only about this: A man who was supposed to have had his leg amputated by now nearly made the U.S. Open cut this week.

Watching Martin play golf is an exercise in empathy. He perpetually maneuvers like someone who was just kicked in the shin, his limp so pronounced that it would look exaggerated if we didn’t know any better.

Simply walking from his cart to the tee box requires effort of fairly grandiose proportions, his machinations echoing that of a man twice his age.

When he stands over his ball, though, Martin more often than not tags it – to the tune of a 297-yard-per-drive clip this week at The Olympic Club.

And when he’s finished watching the ball sail through the sky and find land, he hobbles back to the cart. Martin drives slowly, straight down the fairway, a sheepish and almost embarrassed expression across his face.

He never wanted this. It was necessary for him to compete.

When asked after his second-round 5-over 75 whether he could walk a round or two on this course if he absolutely had to, Martin responded, “That's always a question. Yeah, if you put a gun to my head, sure. But it wouldn't be a lot of fun.”

Don’t mistake the facetiousness for authenticity.

There isn’t much fun for Martin when he’s on four wheels and his playing partners are hoofing it down the fairway. For a guy who shies away from the spotlight, he was thrust into it years ago and remains there now, whispers and stares and points in his direction every time he goes cruising past the gallery ropes.

On Friday, for every few spectators who yelled, “Go Casey!” in his direction, one would mirthfully ask, “Can I have a ride?”

Dealing with distractions is part of the gig for players who compete in major championships, but Martin endures more than his fair share because of this unique situation. Not that he expects otherwise, of course – and not that all distractions are negative ones.

Playing alongside Dennis Miller and Cameron Wilson, the group easily surpassed the number of observers following any other trio of sectional qualifiers. It was all for a good reason.

“The crowds were great to me and I really appreciate that,” Martin said. “It was really touching of them.”

For most of the opening 36 holes, he put on a pretty good show for them, too. Following an opening-round 74, the University of Oregon head golf coach was well inside the cut line as he made the turn.

Bogeys on four of his final eight holes, though – including on his final hole of the day – left Martin one stroke outside the number to return for 36 more holes this weekend.

Even so, it was a performance that should be applauded. Watching him compete can stir varying degrees of inspiration and motivation, but it’s impossible to witness Martin and not own appreciation for the journey.

You may now resume regularly scheduled beliefs on the long-debated Casey Martin issue. Agree with it or disagree with it, we’ve all got to acknowledge the man’s fortitude.