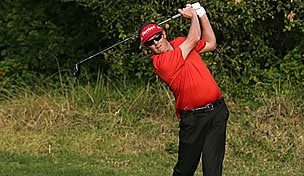 LOS ANGELES – Charlie Beljan says he’s effectively managing the panic attacks that plagued him at Disney World in his breakthrough PGA Tour victory at season’s end last year, but now his expertise is needed to help a family member who is undergoing the same struggles.

Beljan’s younger sister, Bobbi Jo, was hit out of the blue with a panic attack last week.

Beljan, who is in the early hunt at the Northern Trust Open, was asked if there might be some genetic component to the attacks.

“I have no idea,” Charlie said. “My sister had never experienced anything like it.”

Charlie played through a scary, prolonged panic attack in the second round of the Children’s Miracle Network Classic last year. He was hospitalized after signing his scorecard. After an overnight stay, he was released in time for his Saturday tee time and went on to win the event. He credits a healthier diet and eating habits for his recovery.

“I’ve had maybe one or two little [episodes] since that lasted maybe 30 seconds before I’ve talked myself out of it,” Beljan said.

Beljan has had some reasons to be anxious with a rough start to the 2013 season. He arrived at Riviera off four consecutive missed cuts, but he looks poised to end that streak. He opened with a 4-under-par 67 Thursday despite a bogey at the final hole after a three putt in the fog and fading light.

“My game has been good,” Beljan said. “I just haven't been scoring, and finally, after all the hoopla that took place after last year, everything's kind of starting to settle down. Starting to just focus on playing golf again.”