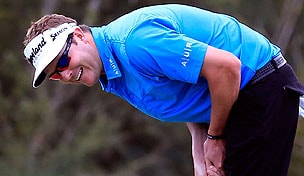 KAPALUA, Hawaii – Hold the waffles for Charlie Beljan. While we're at it, hold the filet mignon, the lobster tail and the three-layer chocolate cake.

'I don't like to eat,' Beljan said. 'I don't like food. I wish I could swallow a few pills every morning and not have to chew on anything the rest of the day.'

It's a running joke in the Beljan family – Charlie's peculiar relationship with food. His parents maintain that Charlie has his own food pyramid that consists of cheese, pepperoni pizza and Subway on top.

Beljan, who made headlines last year at Disney World for winning his first PGA Tour event despite week-long panic attacks and a trip to the hospital, says he's had to learn to eat in order to keep his panic attacks at bay.

'Now I'm eating on the golf course, eating three meals a day. They might be the same thing every day but at least I'm putting some fuel in my body.' Beljan said.