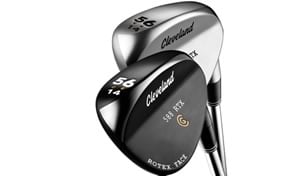 The folks at Cleveland Golf are so convinced of the importance of the short game – and so aware of the fact that some 65 percent of all shots made in a round are from 120 yards and in – that they devote prodigious time and technology to improving their offerings in that realm. The latest examples of that are the introduction of the 588 RTX (for Rotex Face Pattern) and 588 RTX CB (for Cavity Back) wedges.

At the same time, the equipment maker has created an online wedge fitting system designed to educate golfers as to the wedges that would work best for them.

According to Adam Sheldon, brand manager for Cleveland Golf, the big advances in the 588 RTX line were made mostly in the face. For starters, the company expanded the size of the grooves 16 percent in both models so that golfers could impart more spin with them. At the same time, technicians added a milled circular pattern to the lines between the grooves – the Rotex Face Pattern – to increase surface roughness and ultimately friction, for better spin.

Sheldon says that laser-milled score lines work with the Rotex Face Pattern to enhance that attribute, while a wider sole and narrower toe are designed to make it easier to play bunker shots without sacrificing versatility.

The 588 RTX wedges come in two finishes – satin chrome and black pearl. The 588 RTX is available in lofts from 46 to 64 degrees. Lofts in the CB version, which has more weight in the perimeter for better forgiveness and a wider sole, only run to 60 degrees.

As these clubs are released, Cleveland has also introduced a campaign to promote wedge fitting and education online, at www.clevelandgolf.com.

“The idea is to inform golfers about all that goes into getting the wedges that will suit them best,” says Sheldon. “We want to explain everything from gapping and bounce options to sole width and camber so they can make the best possible decisions on their equipment.”