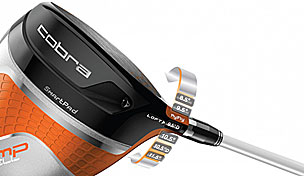 Getty Images
PEBBLE BEACH, CA - JUNE 17: Lee Westwood of England watches a putt on the fourth green during the first round of the 110th U.S. Open at Pebble Beach Golf Links on June 17, 2010 in Pebble Beach, California. (Photo by Ross Kinnaird/Getty Images)  -

It’s hard not to focus first on the colors of the new Cobra Amp Cell drivers. After all, the hues that bear the names Vibrant Orange, Barbados Red and Directoire Blue are pretty flamboyant. So is the one known simply as Silver. But technicians at the California equipment maker said there is a lot more to this line than the overt flashiness that has been an integral part of Cobra products since it was bought by Puma in 2010.

Start with the fact that the Amp Cell driver has one 460 cc head on which the lofts can be adjusted with a simple wrench into six positions: 8.5, 9.5, 9.5 Draw, 10.5, 10.5 Draw and 11.5 degrees. That means there is no more shopping for different heads with different lofts. And thanks to its so-called SmartPad technology, Cobra technicians say they can deliver a square face at address regardless of the loft setting, while still allowing for workability by letting a player slightly open or close the clubface.

With the Amp Cell driver, Cobra also utilizes what it calls Advanced Placement Material and Cell technology to enable a 12 percent larger elliptical E9 face to produce faster ball speeds (for greater distance) on mis-hits and high Moment of Inertia (MOI) for enhanced forgiveness. Company engineers said the Cell technology, which is visible in the bands that wrap around the driver crowns, saves and redistributes weight in a granular way.

In an effort to appeal to the broadest possible range of golfers, Cobra is offering two other versions of the Amp Cell. One is the Amp Cell Pro driver, which Rickie Fowler has put into play. At 440 ccs, the clubhead in that model is slightly smaller but can also be adjusted to six different lofts: 7.5, 8.5, 8.5 Fade, 9.5, 9.5 Fade and 10.5 degrees. And while the Amp Cell has an optimized Center of Gravity (CG) for low-mid handicap players, the Amp Cell Pro uses a lower, more neutral CG position for better players.

In addition, Cobra has released an Amp Cell offset with a heel-based bias for slice correction. It comes in two lofts, 10.5 and 11.5 degrees.