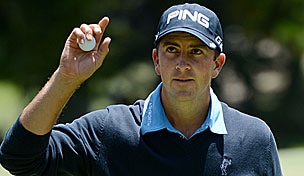 Getty Images
LOUISVILLE, KY - SEPTEMBER 20: Oliver Wilson of the European team waves on the first tee during the morning foursome matches on day two of the 2008 Ryder Cup at Valhalla Golf Club on September 20, 2008 in Louisville, Kentucky. (Photo by David Cannon/Getty Images)  -

“I just found out that I’m taking Russ Cochran’s place in @The_Open,” Thompson wrote on his Twitter account. “All this waiting paid off. Time to get that #warriormentality #RollTide.”

Thompson tied for second-place last month at the U.S. Open.

The news is a bigger deal for Ben Crane, who was listed on the alternate list ahead of Thompson. But Crane did not make the trip to England and was taken off the alternate list Wednesday by the R&A when it learned that he was still at home in Oregon.

Matteo Manassero is now next on the alternate list.