Montgomerie would captain again in '14 if asked 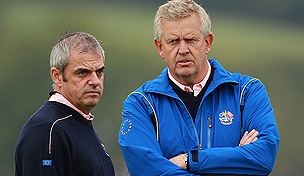 As speculation continues to mount on who will lead the European Ryder Cup squad in 2014 and beyond, former captain Colin Montgomerie admitted this week that he would be willing to take the reins once more if asked to do so.

The leading candidates for the 2014 job have long been Irishman Paul McGinley and former British Open champion Darren Clarke. It wasn't until recently that Montgomerie's name re-entered the discussion.

'I thought it was between Darren and Paul until Darren said something, then my name was mentioned,' the Scot explained to reporters. 'I've never canvassed, as I didn't last time. I've not spoken to anybody about this. But I've always felt that if I was asked I would do it, and that's still the case.'

In what could be an awkward meeting of the minds, the 15-man tournament committee – of which Montgomerie, Clarke and McGinley are all members – will meet next Tuesday in Abu Dhabi, after which a captain for 2014 (and possibly 2016) is expected to be announced. The timing of Montgomerie's sudden surge in consideration is eerily similar to 2010, when his name was put forth by Henrik Stenson and the Scot was confirmed as captain shortly thereafter.

Montgomerie's name gained traction after comments last month from Darren Clarke, who noted following the U.S. announcement of Tom Watson as its leading man that the European counterpart would need a 'huge presence.' Thomas Bjorn, who chairs the tournament committee that will meet next week, insists the choice of a captain should not be a reactionary decision.

'We seem to be able to win with the system we have,' noted Bjorn. 'I don't want us to react to Tom Watson being their captain. I want us to appoint who we think is the right man for the job.'

With three men vying for only one position, the Dane also hopes to avoid any hurt feelings caused by the impending selection.

'Paul and Darren have been two of my best friends on tour all the years I've been out here. It's not easy and I've told both of them they just have to go with what happens,' he added. 'It's for other people to decide. if you miss out it's because it's not the right time – if you're appointed it's because it is the right time.'

The PGA of America announced on Wednesday that the Ryder Cup at Whistling Straits will be postponed until 2021. 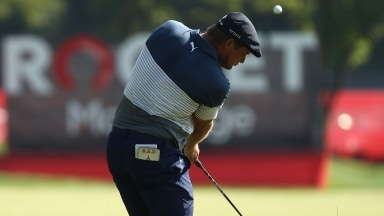 As of now, the Ryder Cup is still slated for this year and, if qualifying ended now, Bryson DeChambeau would automatically be on the U.S. team.