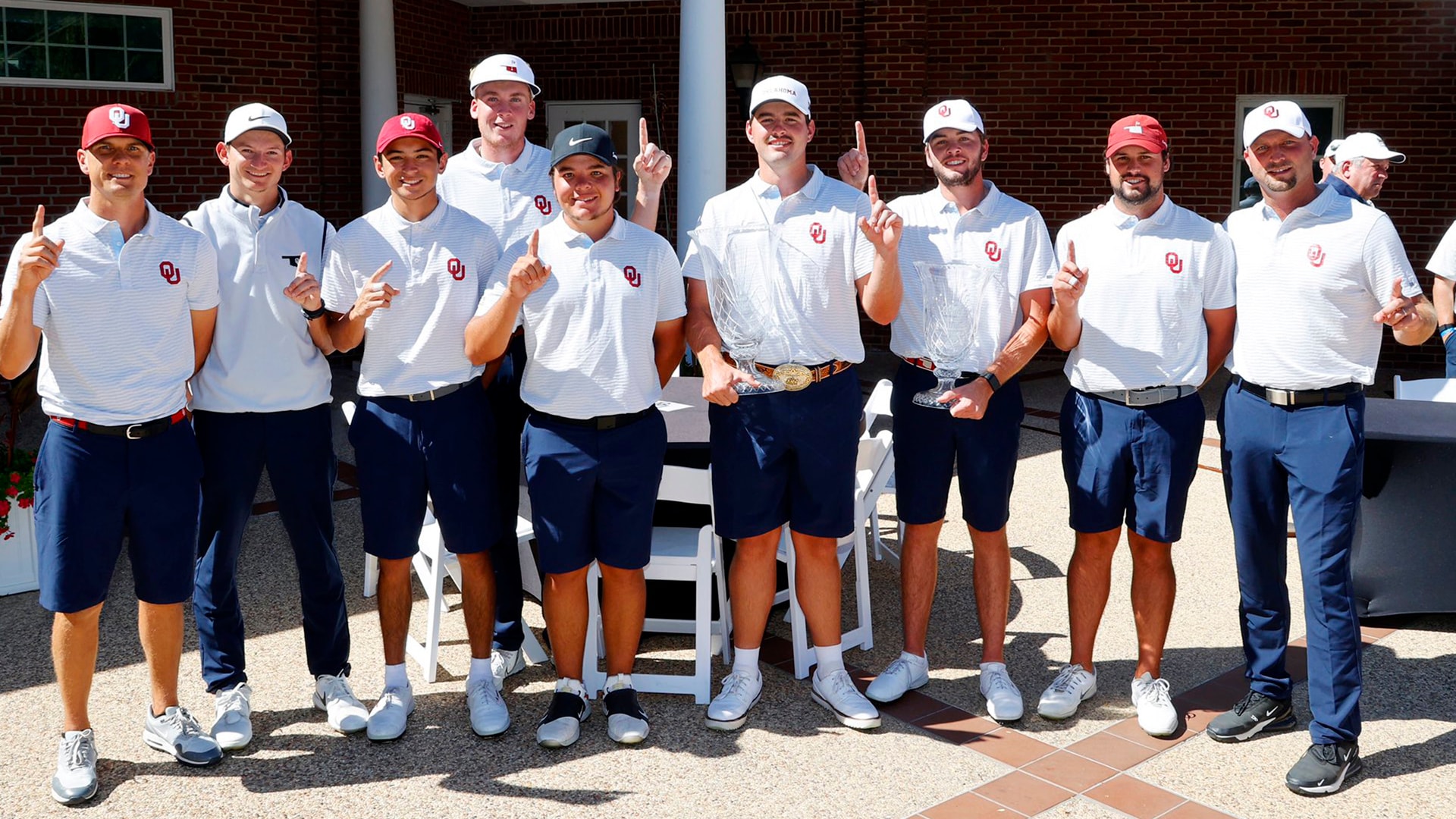 Quade Cummins had it planned for days.

So, after Oklahoma completed its first event of the season on Tuesday, the Sooners’ sixth-year senior (yes, six years!), teammates Patrick Welch and Logan McAllister, and Oklahoma head coach Ryan Hybl turned up the volume in their rental car, pressed play on some Eminem and hit record.

Guess who’s back? Back again…

Oh, and did we mention they were holding a pair of trophies? While a lot has changed because of this COVID-19 pandemic – Oklahoma had its own coronavirus outbreak about a month ago – some things have stayed the same. Like winning in Norman.

The Sooners, one of the preseason NCAA title favorites on the men’s side, opened the fall with a six-shot triumph at the Colonial Collegiate Invitational at Colonial Country Club in Fort Worth, Texas, which, coincidentally, is the place where the PGA Tour resumed its season last June. McAllister, an inconsistent yet wildly talented junior, also took home the second individual title of his career after a two-shot win over Cummins, Texas’ Pierceson Coody and Kansas’ Harry Hillier.

“We’ve been fighting through COVID issues and it just was all about us getting on the road, getting in our bubble and really getting excited about playing tournament golf again as a group,” Hybl said. “Obviously, the results are great, and everyone wants to talk about that, but for us, this was just the start of our season, and what we’re trying to promote is just nothing but thankfulness that we’re able to do this right now because it was so close to not even happening. … But it’s great to win and this is a great start to the year.”

Oklahoma typically starts its fall at Pebble Beach with a six-count-five format. Because of the pandemic, the Sooners are playing a three-event, mostly conference-only slate. The event at Colonial was six-count-four, which still provided Oklahoma – and other teams – the chance to show off their elite depth. Texas and Texas Tech, two other talent-rich squads, finished second and third, respectively. Yet both teams were at relatively full strength; Oklahoma was not.

Senior Garett Reband, a first-team All-American last season, is still recovering from a broken hand, though Hybl expects him to play some at the Big 12 Match Play, which begins Friday at Houston Oaks. In Reband’s absence, though, McAllister stepped up to go alongside Cummins, Patrick Welch and All-American transfer Jonathan Brightwell, who tied for sixth in his OU debut.

McAllister, who “dusted everyone” in the team’s first qualifier this season, fired a closing 4-under 66 to finish at 3 under individually and notch his first win since last fall’s Nike Collegiate. The former AJGA All-American has struggled before with consistency – he cracked the lineup just twice after his victory last season. But Hybl sees a different player this time around.

“His inconsistency has been his downfall here over the last couple years,” Hybl said. “He’s a bigtime player and I’ve been waiting for him to kind of pop through and not just become a consistent contributor for us but also step into a leadership role on our golf team. And this year is going to be the year for him, I know it is.”

With a healthy Reband and improved McAllister, the Sooners could end up being the team to beat come May. A few of their Big 12 rivals, though, may end up having a say.

Texas was paced by the Coody twins, Pierceson (T-2) and Parker (fifth), while breakout candidate Travis Vick shared sixth. Christoffer Bring, who won a hotly contested qualifier to earn the final ticket to Colonial, finished 37th, though he contributed a crucial second-round 68.

That type of performance from the bottom of the lineup will be a luxury for Texas this season, though this week it was a necessity as Notre Dame transfer Hunter Ostrom continues to struggle and standout junior Cole Hammer turned in a disappointing 44th-place finish.

Texas will be without Parker Coody for the Big 12 Match Play, as Coody will compete in the PGA Tour’s Shriners Open, so it’s likely there will be more need for a collaborative effort in Houston.

As for the Red Raiders, who had eight players compete in last month’s U.S. Amateur, they are another deep title contender. At Colonial, they had all six players finish in the top 30, though All-American Sandy Scott’s closing 76 ended any chance of a final-round comeback. Sweden’s Ludvig Aberg, who won back-to-back Nordic Golf League events last summer, tied for 10th along with teammate Andy Lopez. 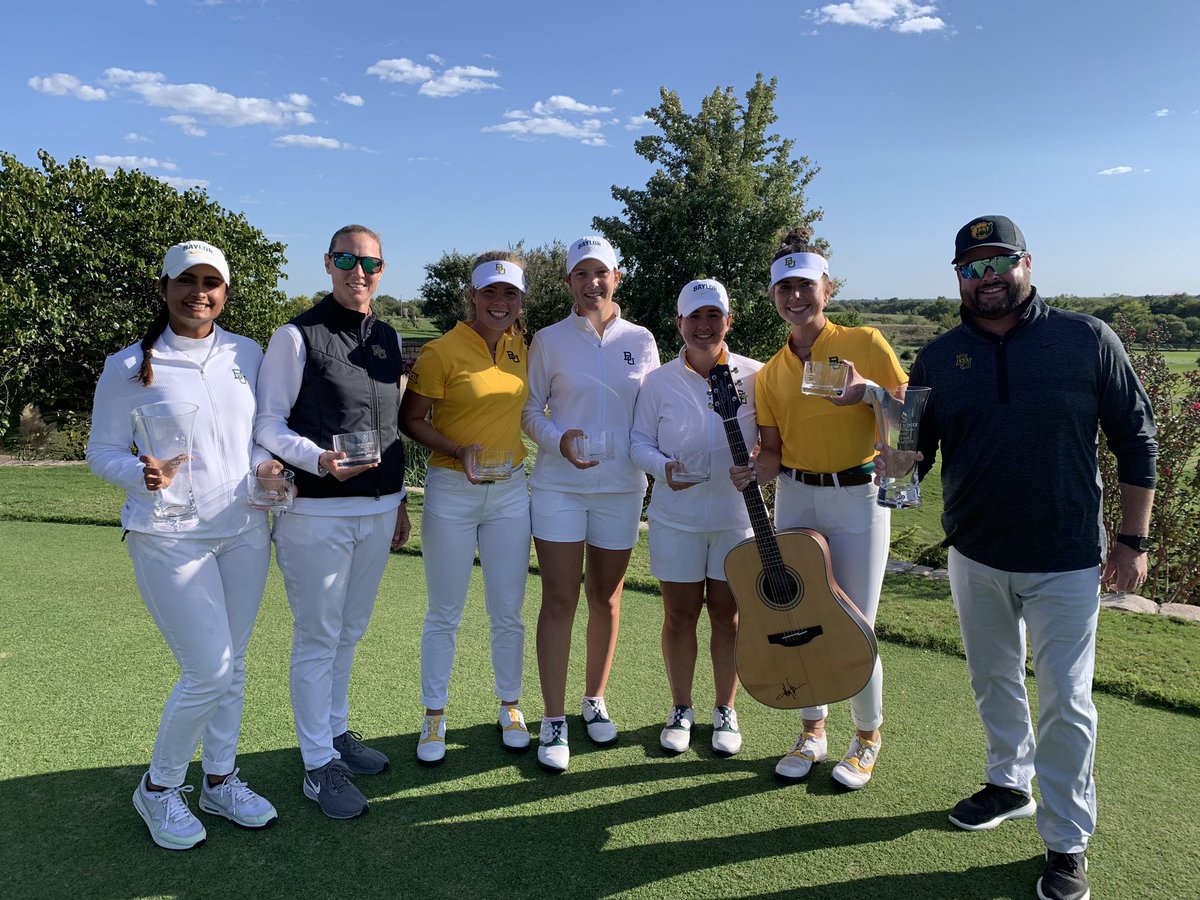 Under head coach Jay Goble, the Baylor women’s program has typically been what Goble calls a “late bloomer.”

“I’ve always had the mantra that we need to finish strong and get better every day,” Goble said.

Even during the 2014-15 season, which ended with the Bears finishing runner-up to Stanford at the NCAA Championship, they debuted at No. 123 in the first Golfstat ranking of the fall.

Yet on Monday, Baylor began the new season with the first season-opening victory under Goble, who is in his 10th season leading the program. The Bears won the Schooner Fall Classic with a school-record 31-shot victory over host Oklahoma and TCU. It was a wire-to-wire win for Baylor, which jumped out of the gates with a 5-under start through four holes.

Junior Gurleen Kaur shot 5-under 205 to win medalist honors for the second time in her career. She shared the individual title with Kansas State’s Reid Isaac. The Bears, who were 7 under as a squad, also got top-10s from freshman Britta Snyder (T-3), fifth-year senior Elodie Chapelet (fifth) and freshman Hannah Karg (10th).

Freshman Rosie Belsham tied for 21st to round out the lineup for what Goble calls his deepest team ever. The Bears left home junior Diane Baillieux, who competed in seven events last season, and heralded freshman Nina Lang.

“This is uncharted territory for myself as a coach,” Goble said of starting the year off with a victory. “I personally enjoy being the underdog and we’ve prided ourselves on that for a few years now, but I think we’re to the point now where people know we are a good golf team and we are going to be there when the postseason rolls around.”

All 28 SEC golf programs – 14 men’s and 14 women’s – will converge on Blessings Golf Club in Fayetteville, Arkansas, for the Blessings Collegiate Invitational, the first of three SEC-only events for most teams. (Only the South Carolina, Florida and Ole Miss women will forego the third women’s all-SEC event in order to compete in the East Lake Cup.)

The Gamecocks were one of two SEC women’s teams that finished last season’s shortened campaign ranked inside the top 10 by Golfstat (the Gators were the other at No. 9). This season, South Carolina is expected to better that No. 7 ranking from a season ago.

While the Gamecocks are without senior Ana Pelaez this fall, they return one of the top amateurs in the world, sophomore Pauline Roussin-Bouchard, and add Kent State transfer Pimnipa Panthong to the mix.

“We can’t take any opportunity for granted,” South Carolina coach Kalen Anderson said. “We’re one of just a few conferences who get to play fall golf and we have to take advantage. They’ve missed playing and being together as a team, and I’m excited our conference and university have given us the opportunity to compete.”

On the men’s side, Texas A&M (8) and Vanderbilt (9) are the only top-10 teams from a year ago, but the competition in the conference figures to be wide open. The Aggies will have to adjust to life without head coach J.T. Higgins, who took the USC job this summer. The Commodores return John Augenstein but need more from the bottom of their lineup. Georgia returns two first-team All-Americans in Davis Thompson and Trent Phillips. And Florida and Alabama look to be much improved.

The action at Blessings, which hosted the 2019 NCAA Championships, will be televised live on Golf Channel from 4-7 p.m. ET Monday-Wednesday. The East Lake Cup will also be shown on Golf Channel later this fall.

“The two events on TV just up the game a little bit,” Anderson said.

MEN – Oklahoma State is widely regarded as a bounce-back NCAA men’s title contender this season. But the Cowboys placed eighth at Colonial, their worst season-opening finish since the 2014 Carmel Cup, when they also finished eighth. The Cowboys have five new faces on the roster this season, including transfer Eugenio Chacarra, and had several of its players test positive for COVID-19 in the past month, so one can probably chalk this performance up to rust. The bright spots were Chacarra and second-year freshman Brian Stark, who each tied for 15th. Returning first-team All-American Austin Eckroat tied for 31st. … TCU sophomore Aymeric Laussot finished last season ranked second-to-last in scoring average on the team, yet he led the Horned Frogs with aa solo-ninth showing at Colonial. … Paced by medalist A.J. Lintunen, Chattanooga won the J.T. Poston Invitational on Tuesday by 16 shots over host Western Carolina. The Mocs were coming off a fifth-place finish at the Scenic City Collegiate, where Lintunen tied for fifth to lead the team individually. … For the Big 12, the men’s competition schedule does not pause. The Big 12 Match Play begins Friday at Houston Oaks. Each team will play five matches with six individual matches per match. Last fall, Texas Tech won the debut event.

WOMEN – Texas, one of the preseason favorites to win the NCAA women’s title, only fielded a four-player lineup for the Schooner. The Longhorns, already without their two international players (senior Agathe Laisne and junior Sara Kouskova) this fall, were also missing their other three seniors, including All-American Kaitlyn Papp, because of injuries and other reasons. Texas ended up finishing 10th out of 11 teams, 54 shots back of Baylor. … Oklahoma has hosted the Schooner since 2013. Monday’s co-runner-up showing was its best finish at its home event since the Sooners finished second at that inaugural tournament. … TCU’s joint runner-up finish at the Schooner was the Horned Frogs’ best finish in their fall opener since the 2015-16 season. TCU, which finished T-12 and 14th in its previous two Schooner appearances, was paced by three players in the top 12, including sophomore Jennie Park, who tied for sixth behind a career-best 67 in the second round. … Sofia Garcia, a fifth-year junior at Texas Tech, tied for sixth at the Schooner in what was her 20th career top-10 finish for the Red Raiders. 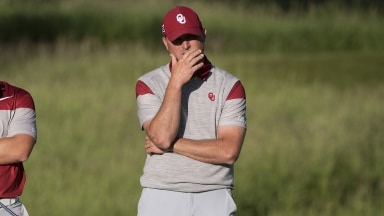 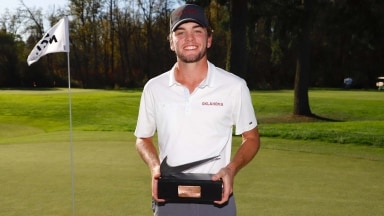 OU’s McAllister wins in 1st start in nearly a year

Oklahoma sophomore Logan McAllister hadn't played for the Sooners in almost 11 months, but on Tuesday he won in his first start back.