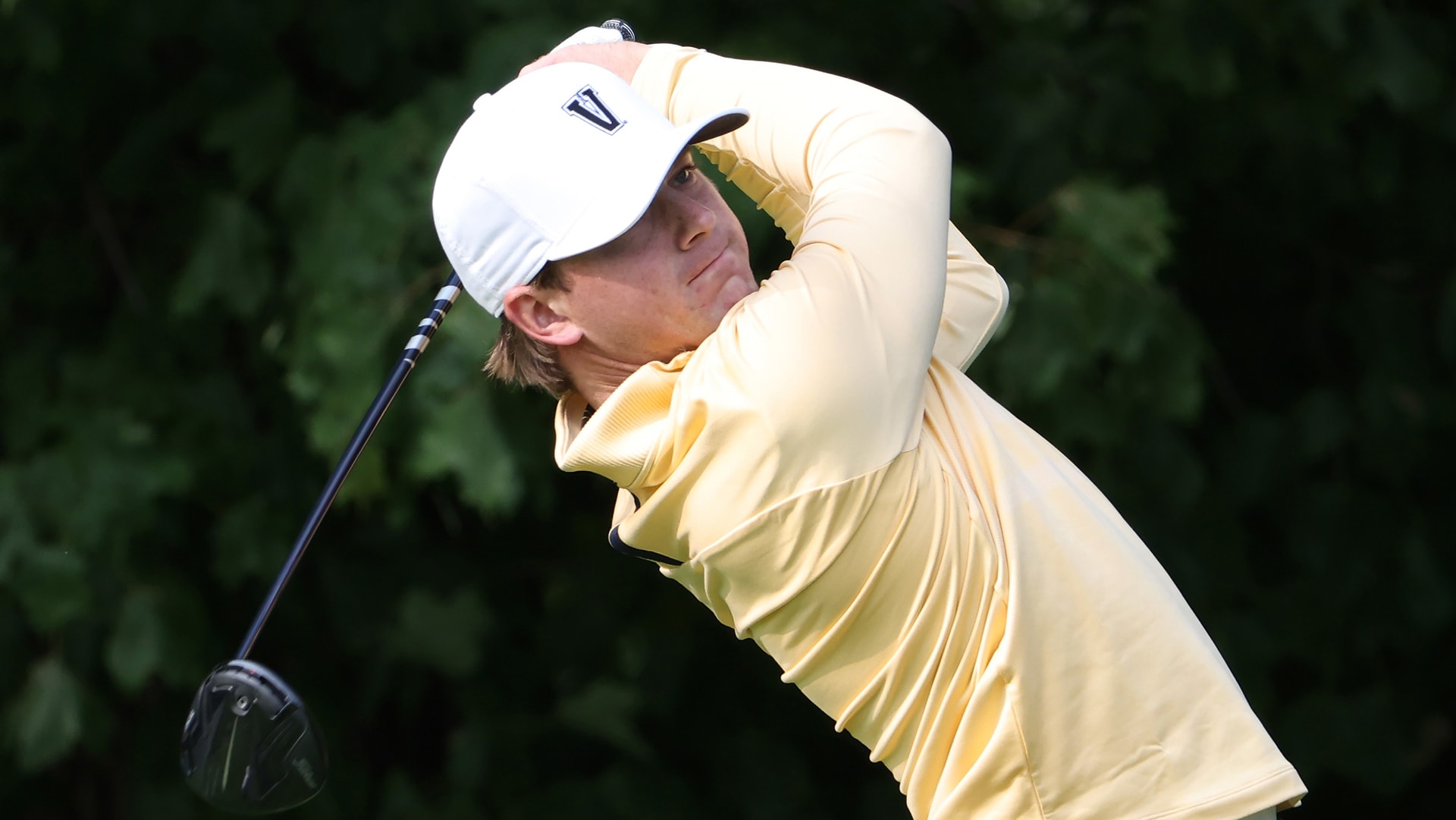 As the sun set Tuesday evening at Vanderbilt Legends Club, Commodores senior John Augenstein and head coach Scott Limbaugh found themselves facing off in a game of “Sinks.” The head-to-head putting competition is a variation of H-O-R-S-E in which two players putt to opposite holes at varying distances, and Limbaugh was no match for his star player.

For Augenstein, it’s certainly satisfying to beat his coach, but it’s also good practice for the challenge he’ll see next week when he makes his Masters debut. It will be the second major start of the fall for the 2019 U.S. Amateur runner-up, following the U.S. Open at Winged Foot, where Augenstein admits it was his flatstick that let him down.

“From a mental standpoint, I felt the same as any other tournament, felt very comfortable. I felt like I belonged there,” Augenstein said. “But I had a poor putting week. I had some pretty poor speed. I didn’t feel like I put enough work in in prep and it showed in the tournament.”

Augenstein shot 74-75 to miss the cut by three shots at Winged Foot. However, in two college starts since then, he’s looked more like the five-tool player who starred for the U.S. Walker Cup team last fall and earned first-team All-American honors last season. He tied for 13th at the fall opener at Blessings, not making anything worse than bogey on the tough championship layout. He followed with a runner-up showing at Vanderbilt’s home event last week.

“I feel like I’m starting to peak at the right time,” Augenstein said.

There is still room, though, to make more birdie putts. In recent weeks, Limbaugh has given Augenstein, who will miss the team’s fall finale in Alabama next week, the freedom to chart out his own practice schedule as he prepares for Augusta National. Not surprisingly, Augenstein has chosen to focus on his putting.

At the team’s practice facility, Augenstein has had undulating, bentgrass greens to putt on – and the maintenance staff has sped them up as much as they’ll go.

Augenstein also has his ball-striking where he wants it. His ball control was spectacular in shooting 13 under through 54 holes last week, and he’s been spending time working on different shots he may need for the Masters, including hitting big draws with his 3-wood and cuts off of hanging lies.

“With how far he carries the ball and how high he hits it, there will be more of a level of comfort for him there compared to Winged Foot,” Limbaugh said. “He likes it there.”

Augenstein has played six rounds at Augusta National in the past year. His last round was in March, coincidentally on the same day in which his original senior season was cut short because of the pandemic. He chose to return for an extra year, although he will make a decision after the Masters whether or not he will play for Vanderbilt this spring. A strong performance in Georgia would likely bump him into the top 5 of the PGA Tour U ranking, where he currently sits sixth.

As for his first round at Augusta National, that came almost a year ago, on the week before Thanksgiving.

“I did, interestingly enough, see it kind of how it’s going to play,” Augenstein said. “It’s going to be tighter lies and a little firmer, I think, because when I played last year, they had just planted the rye overseed and the grass was a little long. But it was great, I played it in the weather that I’m probably going to play it in, so having that experience may actually bode well for me.”

While Augenstein won’t get to experience staying in the Crow’s Nest this year, he will still attend the amateur dinner and also hopes to be making a trip to Butler Cabin on Sunday as the low amateur (of course, he'll take a green jacket, too).

Limbaugh, who will be back in Nashville rooting him on, likes Augenstein’s chances.

“He’s got a little glow in his eye,” Limbaugh said, “but he also knows that he’s gotta go play golf, get through the nerves, and I feel like he’ll be a little more comfortable in his second go-round of a major.”

Hogan all systems go for Houston

Kyle Hogan will make his PGA Tour debut this week after all.

Despite missing last week’s East Lake Cup for reasons related to COVID-19, the Texas Tech senior has passed his tests and is all set to tee it up in the Vivint Houston Open, which begins Thursday.

“I've been to a couple of Houston Opens when I was growing up,” Hogan told the Lubbock Avalanche-Journal. “Some family's coming in, and some of my friends from high school were able to get tickets, so I'll have a lot of familiar faces in the crowd.”

Hogan, who is from nearby Cypress, Texas, won in his last start, two weeks ago at the Maridoe Collegiate Invitational, a victory that earned him his exemption into the field at Memorial Park. But he and several teammates were unable to play last week in Atlanta because of COVID-19 and subsequent contact tracing.

He will play the first two rounds alongside Dawie van der Walt and Isaiah Salinda.

"This is pretty phenomenal and speaks to the kind of kid he is," said Texas Tech head coach Greg Sands, who will be Hogan's caddie this week. "He's one of the hardest working guys I've been around and is always putting in a lot of time. ... I'm excited for him to have this opportunity."

Hogan also figures to get a nice boost in the PGA Tour University ranking, especially should he play well. He enters the event at No. 13.

Here is the latest PGA Tour University ranking, where three players in the top 15 – Kyle Hogan, John Augenstein and Davis Thompson – will make PGA Tour starts in the next handful of weeks: