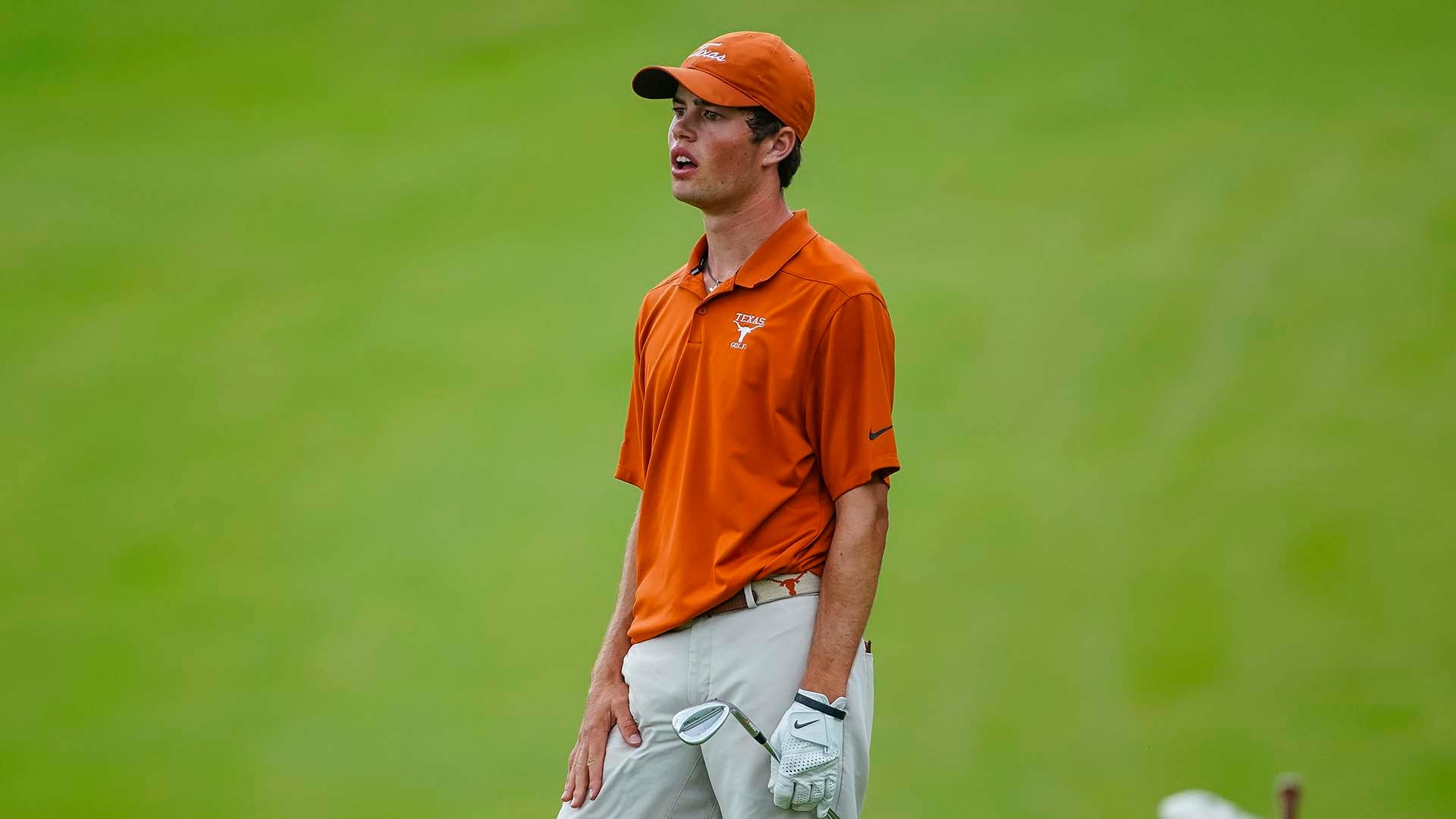 The days of dominance in men’s college golf are over – for now.

In the past decade, we’ve seen familiar faces such as Oklahoma State, Texas and Alabama consistently contend for – and win – national championships. Most recently, the Cowboys reigned supreme over the sport for the good part of two seasons, winning it all in 2017 and rolling in stroke play last spring before falling in the semifinals.

But as the fall season winds down, this much is clear: there is no clear-cut NCAA title favorite.

In fact, one could argue that there are more contenders this season than we’ve seen in a very long time.

“There are a lot of good teams and a lot of good coaches,” said Texas head coach John Fields, “and if you go to sleep and play the kind of schedule that we do, you’re going to get your butt kicked.”

Right now, Texas finds itself fighting to stay awake and massaging its proverbial rear. The Longhorns were the preseason No. 1, and for good reason: they returned most of their talented roster that upset Oklahoma State last spring, including All-American Cole Hammer and Coody twins Pierceson and Parker, and added a strong freshmen class led by Travis Vick.

But Texas failed to finish better than fifth in any of its three stroke-play events this fall while posting a pair of ninth-place showings at Olympia Fields and Isleworth. Pierceson Coody has been battling a shoulder strain, while Vick’s acclimation to college golf has been slower than expected. Hammer has just one top-10 while also missing the Big 12 Match Play to play in the Houston Open.

Yes, this team arguably has yet to be at full strength, but it's still been a very disappointing fall.

“I’ve probably thought just like our players thought that we’d come in with a little more incentive because of what happened last year, and I’m not sure what’s going on right now,” Fields said. “I know that we have to get a lot better. We’re not playing very good golf right now. … These guys have a lot to live up to and I’m sure they’re feeling a little bit of heat right now.”

Texas, now outside the top 25 in Golfstat, will be just fine; getting hot in the spring is this program's M.O. But at this point, they’re not anywhere close to being dominant.

Neither are the other popular NCAA favorites.

Arizona State, which will host NCAAs at Grayhawk, was preseason No. 2 and won each of its first two events, including at Trinity Forest while missing three starters because of the Asia-Pacific Amateur. But the Sun Devils closed the fall with two finishes outside the top 3.

Georgia Tech also looked unbeatable early, winning twice to open the season and grabbing the top spot in last week’s first Golfstat ranking. But the Yellow Jackets then finished 10th at their home event, the Golf Club of Georgia Collegiate, on Sunday.

Even Texas Tech, which was undefeated through three tournaments before arriving at the Tavistock Collegiate, slipped up, finishing fourth and 20 shots off the pace at Isleworth.

“I think I’ve seen about seven different teams post a graphic on social media that they’re ranked No. 1,” said Arizona State head coach Matt Thurmond, referencing the many polls and ranking systems. “All of us would like to be the team that’s dominating, but no one is yet.”

Instead, more teams have entered the fray and packed inside the elite bubble. Sure, there are many of your regulars in the top 25, teams such as Oklahoma, Wake Forest, Pepperdine, Duke, Vanderbilt and Auburn. But there are more than a few unexpected teams that have the early look of an NCAA match-play squad.

We’ll start with SMU. The Mustangs qualified for match play last season before losing to Oklahoma State. This fall, they’ve started the year second-win-win and are now ranked third in the country.

Notre Dame, coached by former Florida assistant John Handrigan, who in his third season has led the Irish to a school-record four tournaments victories (one of those, at the Fighting Irish Classic, came by 27 shots over Arizona State). They’ve done that in just five events and are currently a top-10 team nationally.

So is BYU, which is the last of the unbeatens, having won each of its previous three fall events. The fourth-ranked Cougars, however, do trail San Jose State by four shots entering Wednesday’s final round of the Pacific Invitational.

Louisville is ranked 10th. Oregon State is in the top 15. Colorado State, which fell one shot shy at regionals last season, is No. 22.

Then there’s UCF, which up until the Tavistock had done little to warrant national attention. But the No. 72-ranked team in the country took down Texas, Arizona State, Texas Tech, Vanderbilt and a list of other blue-bloods, posting a 14-shot victory on a tough Isleworth course. The win moved the Knights to 16th in Golfstat.

“There’s just a lot of youth in college golf from an experience standpoint,” UCF head coach Bryce Wallor said. “You’re going to see guys have some good weeks and have some average weeks, and we’ll see how it boils down in the end.”

The loss of last season’s deep senior crop, highlighted by Cal’s Collin Morikawa and USC’s Justin Suh, certainly has had its effect on the parity that we’re seeing this season. In Oklahoma State’s case, the Cowboys likely would be the prohibitive favorites had Matt Wolff and Viktor Hovland not turned pro early.

But more balance in the game has created more excitement, more unpredictability, more chances for more teams to shine. Just seven of the top 25 teams in Golfstat haven’t won a tournament yet this season. The No. 1 team, Oklahoma, has won just once. At the Golf Club of Georgia, just 23 shots separated first-place Duke and last-place teams TCU and Virginia.

“The amount of depth in college golf is great for our game,” Notre Dame head coach John Handrigan said. “… This year’s parity is going to lead to an exciting championship.”

1. Johnny Travale’s one-shot victory Tuesday at the Tavistock was his first of the season – and college career. The Ontario native has three top-5s in the four starts this fall after transferring from Kent State during the summer. As a freshman with the Golden Flashes, Travale’s best finish was sixth. “Him transferring into our program was a game-changer for us,” UCF head coach Bryce Wallor said. Travale led the field at Isleworth with 17 birdies, including seven in the final round. He also beat some of college golf’s elite players – Texas Tech’s Sandy Scott by six, Vanderbilt’s John Augenstein by eight, Texas’ Cole Hammer by 10, Florida’s Ricky Castillo by 14 and Arizona State’s Chun An Yu by 16.

2. Notre Dame did something Monday that it had never done before in program history: win four tournaments in a season. Even more impressive is the fact that Notre Dame did it in just five fall starts. With victories already at the Badger Invitational, Windon Memorial and Fighting Irish Classic, the Irish arguably picked up their most exciting win Monday at the Quail Valley Intercollegiate. Freshman Palmer Jackson birdied the final hole to not only win medalist honors for the first time but also give Notre Dame a one-shot victory over South Florida. Jackson now has four top-11s in five starts this season. “These guys showed a ton of grit keeping their heads down after early success and were never satisfied,” Notre Dame head coach John Handrigan said. “In my 20 years of coaching I’ve never been a part of something this impressive.”

3. Duke picked up its first victory of the season Sunday at the Golf Club of Georgia Intercollegiate, holding off Pepperdine, which shot 7 under on the final day, to win by two shots. “It was something that has been building for us, so it was nice for our guys to see the reward and be able to take the trophy home,” Duke head coach Jamie Green said. The Blue Devils, a national semifinalist two seasons ago, had opened its season with a runner-up showing at the Rod Myers and seventh-place finish at the Nike before going 1-1 at the Jack Nicklaus Invitational.

5. The Ole Miss women won for the second time this fall, capturing the Jim West Challenge on Monday. The Rebels set a program record in the first round with a 19-under 269 before posting a 10-shot, wire-to-wire victory. Texas Tech was second while Florida State, playing without top player Frida Kinhult because of Q-School, was ninth.

As the fall winds down, eight of the top teams in the country – four men’s teams (Texas, Vanderbilt, Wake Forest and Oklahoma State) and four women’s teams (Duke, Wake Forest, Arizona and Auburn) – will compete in the East Lake Cup, which begins Monday. 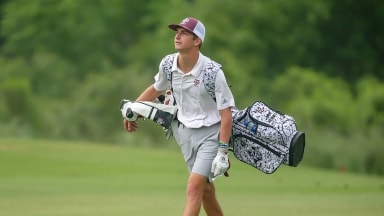