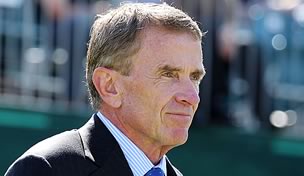 MARANA, Ariz. – On Sunday at Dove Mountain, about midway through the final match at the WGC-Accenture Match Play Championship, PGA Tour commissioner Tim Finchem confirmed what his players overwhelming told him early last week – there is no reason to ban anchoring.

“Essentially where the PGA Tour came down was that they did not think that banning anchoring was in the best interest of golf or the PGA Tour,” Finchem said.

Finchem did, however, stop short of suggesting that if the ban, which was proposed by the U.S. Golf Association and Royal & Ancient Golf Club last year, is passed later this spring the Tour would break from the Rules of Golf and create its own set of rules.

“We have not even begun that discussion,” Finchem said.

Finchem also dismissed suggestions that the issue has caused a rift or power struggle between the Tour and USGA and R&A.

“I've read some things that would suggest that this is some kind of a donnybrook between the PGA of America and the PGA Tour on one side and the USGA on the other, and that's not really correct,” Finchem said. “They've asked us to give our comments. All we're doing at this point is saying this is our opinion.”

The 90-day comment period on the potential ban ends next Thursday and Finchem said he expects a decision on whether golf’s rule makers will proceed with the ban “in the next month or so.”

The USGA released a statement following Finchem’s press conference:  “As we consider the various perspectives on anchoring, it has always been our position that (the potential ban) aims to clarify and preserve the traditional and essential nature of the golf stroke, which has helped to make golf a unique and enjoyable game of skill and challenge. It is our plan to take final action on the proposed rule in the spring.”

Finchem’s comments echoed those of many players who participated in two separate conference calls this week regarding the issue. On Monday the circuit’s Player Advisory Council voted overwhelmingly according to multiple players on the call to oppose the ban. Later that day Finchem had a second conference call with the Policy Board to solidify the response, which was sent to the USGA and R&A late last week.

“It felt like, from what we got from the PAC, the majority was in favor of keeping it the way it is. Opposing the ban,” said Steve Stricker, one four player directors on the Policy Board. “It’s not everybody’s thinking, but it is overwhelming lopsided to oppose the ban.”

For Webb Simpson, a member of the PAC and among the estimated 18 percent of Tour players who anchor the club while putting, the vote and written response carried a slight air of vindication.

“A little bit,” Simpson said. “It didn’t look that way at first but the more people looked at it and saw the facts everybody agreed it is a good decision (Finchem) is making.”

For Finchem and the Policy Board the potential problem with the ban was twofold: anything that keeps amateurs from playing the game, and adds to the game’s participation declines, should be closely examined, and from the Tour’s point of view the product has never been better.

Nor did the Tour feel the USGA and R&A made a compelling enough case to outlaw something that has become a central part of the game.

“They can’t prove there is a benefit to using a long putter,” Stricker said. “I never saw anything and they will admit there is no evidence to back that up. In general the game of golf is not in a good spot, why would they try to detract players from playering the game?”

The PGA of America has already come out opposed to the potential ban and the European Tour is expected to draft a formal response before Thursday’s deadline but its stance remains unclear.