Could this week bring the spark the Presidents Cup so desperately needs? 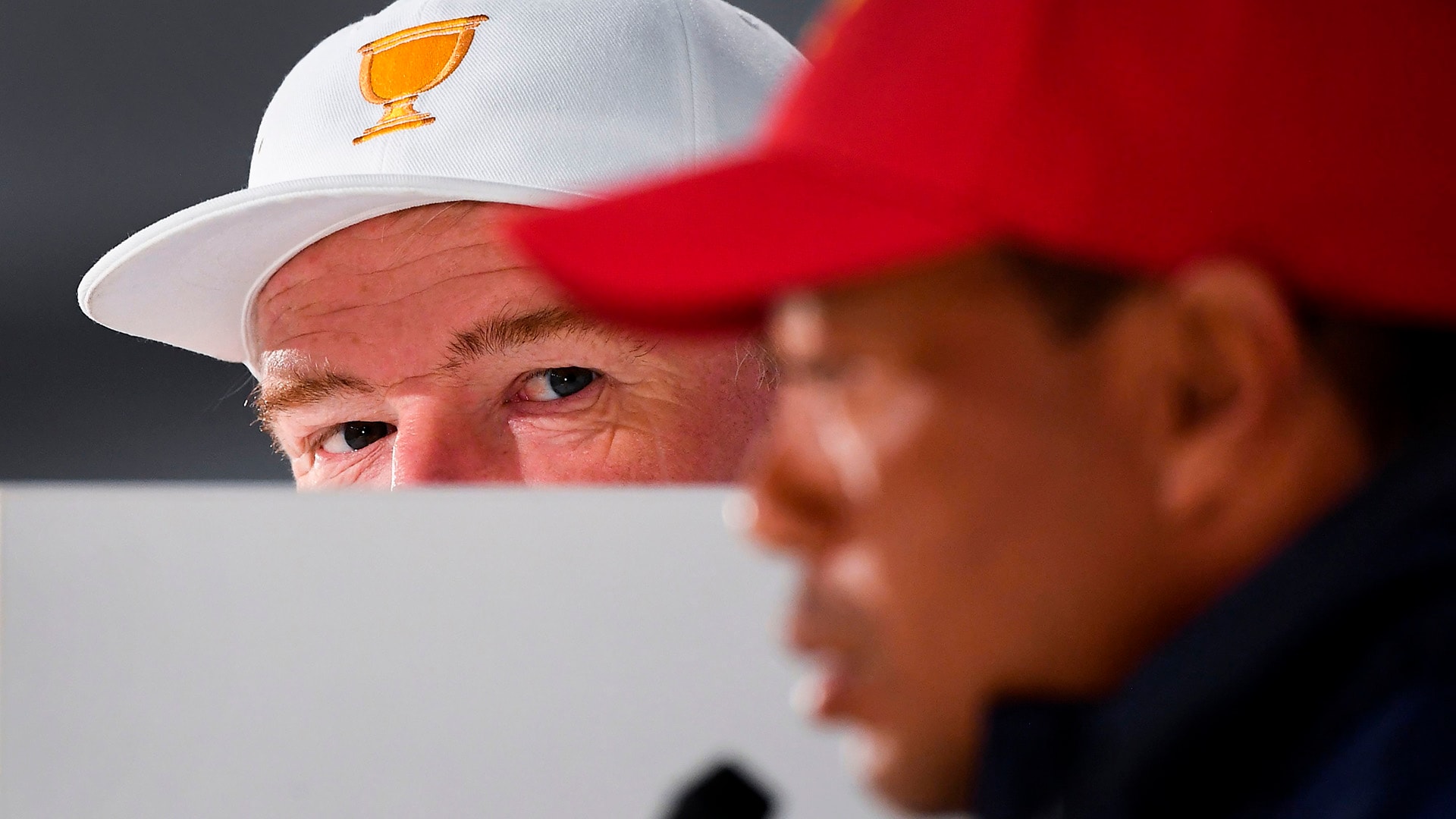 MELBOURNE, Australia – At Tuesday’s gala dinner, a highlight video chronicled more than two decades of Presidents Cup drama. It was about 90 seconds long.

With apologies to all the players who have participated in the event, there’s really just a single highlight reel moment for the Presidents Cup, and that came way back in 2003 in South Africa when Tiger Woods and Ernie Els battled into twilight to decide the match. It was epic, but even that moment ended in a tie, which for American audiences isn’t exactly appointment viewing.

Any other highlights have been akin to a Harlem Globetrotters bout against the Washington Generals. It’s fun to watch, but the outcome is never in doubt.

The 2015 edition had the potential to be a memorable finish, with Chris Kirk converting from 16 feet at the last hole for an unlikely Sunday singles victory over Anirban Lahiri, but the one-point U.S. victory never really seemed in question.

Excluding the ’03 tie and the ’15 decision, the average winning score in the event is 5 ½ points - which is wildly one-sided. That all but one of those blowouts, the ’98 matches which were the first played at Royal Melbourne, have gone the American’s way is item No. 1 on the International team’s bulletin board.

Els’ dozen don’t need to be reminded how lopsided the matches have been. For the handful of veterans in this week’s field, they’ve lived it. They remember the close call in ’15 and the debilitating loss two years ago at Liberty National. They remember the promise of the ’11 matches at Royal Melbourne and the empty aftermath following another commanding U.S. victory.

Els is the International team’s final connection to the side’s only victory at the ’98 matches in Australia and he understands better than anyone how much this week means not just to his team but to the entire event.

The matches are littered with good intentions. The field on both sides of the international dateline is stellar. The format has been tweaked in favor of the home team. And the captains, Els and Woods, have essentially defined the event. But good intentions don’t produce drama and the Presidents Cup desperately needs bona fide drama to remain relevant on the competitive landscape.

“We're almost at that point,” admitted Louis Oosthuizen, when asked if the matches are in danger of becoming an afterthought. “In 2015, it was really hard because the boys were really playing well. We all know Chris Kirk made that putt on 18 and Anirban missed that putt. If it was the other way around, we won. It was such a close call, and then obviously running up against a brick wall in [2017] with an unbelievable in-form U.S. team was just a very difficult week.”

But this is about more than simply fan interest in the event. For players like Oosthuizen and Adam Scott, staples on a perennial also-ran, a victory would be a reason to stay engaged.

“I'm pretty sure if you ask Adam who has played nine and would love to get a win, I think it gets to a stage where it gets difficult to motivate the guys. It's no fun going out and everyone is saying, ‘They are just going to run over them again,’” Oosthuizen said.

For Els, the company line has been simple: if not now, when? If not here, where? If not Ernie, who?

If ever there was a reason to be optimistic about the International team’s chances, it’s this week, where Els will lead seven rookies into the fray. While some would consider the inexperience a liability, Els and Co. are considering it a chance to reset. The likes of Haotong Li and Joaquin Niemann simply don’t bring the baggage that’s weighed down Scott and Oosthuizen for so long.

Many of the International players have the benefit of having played last week’s Australian Open in Sydney for an extra few days to acclimate, compared to the U.S. team’s 26-hour door-to-door trip from the Bahamas on Monday.

Els’ crew also has the benefit of facing a banged up U.S. team that will set out without world No. 1 Brooks Koepka (knee), and No. 5 Dustin Johnson (knee) hasn’t played since the Tour Championship in August. Rickie Fowler (bacterial infection) was tabbed to replace Koepka, but has just a single start since East Lake. Even Woods, this week’s star attraction and the U.S. side’s hottest player, will keep himself to a pitch count as he splits time between playing and captaining.

It’s worth noting that Woods cited competitive rust earlier this week when asked what happened in ’98, when the International side won the match for the only time. “Quite frankly, most of the guys didn't play. They put the clubs away. Rested for a month and a half, the guys just weren't sharp,” he said.

For many of Woods’ players, last week’s Hero World Challenge, a limited-field unofficial event, is their only tune-up for this week’s event. If ever the U.S. team could be considered a paper tiger it’s this week.

“If Liberty National and Muirfield Village was where we were real underdogs, you would figure this would be the best scenario it could get for us,” International vice captain Geoff Ogilvy said. “The course is tricky to learn, we’ve got more experience, the time differences. Ernie and Tiger match up so well and our guys get that. I think it fires them up.”

For Els, these matches are very much a tipping point for a team in desperate need of a “W” and an event starving for a few meaningful highlight reel moments.