Over the top down under: New Zealand takes golf to new heights 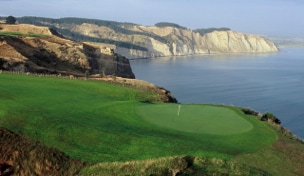 NORTHLAND, New Zealand -- Julian Robertson points toward the 14th green at Kauri Cliffs, set against the backdrop of the Pacific Ocean and the Bay of Islands.

'These are the best holes in golf,' he said, his voice filled with passion and excitement.

Hyperbole? Yes, but not by much.

Robertson loves to have golf guests close their eyes during the cart ride up the hill before reaching this point, so he can surprise them with the incredible views. The next four holes hug the rugged northern coast of the North Island.

Robertson, a former hedge fund giant who splits his time between New York and New Zealand, almost single-handedly made New Zealand a must-play destination by opening Kauri Cliffs in 2000 and Tom Doak’s Cape Kidnappers in 2004, the two headliners of the more than 400 courses in the country. Even for purists, the game takes a backseat to such magical surroundings.

'It’s the different landscapes that draw people to New Zealand,” said Samuel St. George, a director with Eighth Wonder, a luxury golf tour operator based in New Zealand. “There are mountains down south. Up north, there are beautiful lakes and beaches. It has diverse microclimates...You’ve got to explore the whole country if you come.'

The length and cost of the 13-hour Air New Zealand flight from Los Angeles across the international dateline deters so many players from attempting the journey. Adventurous spirits who venture halfway around the world are rewarded with a combination of golf, food and wine like no other.

'What distinguishes New Zealand golf from the U.S. is the courses are not part of the housing,” he said. “You can see the hills, the water, the mountains. The physical beauty of the courses is amplified by the surroundings. It’s a unique experience.' Bucket-list chasers must work overtime and plan carefully to find the best golf on New Zealand’s North Island. Golf Digest has ranked six different North Island courses among the top 100 international courses outside of the United States since 2005. I spent 10 days hopscotching across both islands and still missed out on the Gulf Harbour Country Club near Auckland and the Paraparaumu Beach Golf Club near Wellington. Also of note, Doak is currently designing Tara-iti Golf Club in Mangawhai, a project 100 kilometers north of Auckland that will create more buzz should it open in 2014 as planned.

Few tourists would dare drive the 440 miles of winding roads between Kauri Cliffs and Cape Kidnappers, located in Hawke’s Bay on the eastern shore. (Google maps calls it an 8 ½-hour trek). It’s best to utilize Air New Zealand’s network of small regional airports, where there is no security and passengers can show up 10 minutes before their flights. It’s a two-flight hop – through Auckland – from the Bay of Islands Airport in Kerikeri, 35 minutes from Kauri Cliffs, to Hawke’s Bay Airport in Napier, 35 minutes from the Farm at Cape Kidnappers.

Both of Robertson’s golf lodges ooze luxury in great locales. Kauri Cliffs offers great fishing, boating and beaches. Cape Kidnappers counters with wineries, gannet colony tours (a seafaring bird) and Napier, a beach town rebuilt in the 1930s after an earthquake and touted as the Art Deco capital of the world. It makes for a great debate over dinner and drinks which golf course is better. Kauri Cliffs serves up more scenery, but the epic fingers of land and cliffs at Cape Kidnappers tend to generate higher world rankings.

Ikuo Morimoto regularly makes the journey from Scottsdale, Ariz., to play Cape Kidnappers, named by the explorer Captain James Cook in 1769. 'It’s a warmer version of Ireland,' he said. 'It’s like Ireland in the southern hemisphere.'

It’s a scenic drive of less than three hours from Cape Kidnappers to Lake Taupo and the magnificent Huka Lodge, a great home base to play the nearby Wairakei International Golf Course and The Kinloch Club 20 minutes away. Nicklaus, who has stayed at the Huka Lodge for fly-fishing expeditions, cut a demanding inland links from the wild hills of Kinloch. Wairakei International became a protected pest-free wildlife sanctuary in 2011 when the owner fenced in the 6,444-meter course (roughly 7,047 yards) and planted more than 25,000 native trees and 5,000 exotic species, both for beautification and as a food source to attract native birds. It’s a peaceful place, brimming with possibility. The Wairakei Golf Resort, just up the street, caters to more budget-conscious travelers.

True to form, Queenstown, regarded as the adventure capital of the world, doesn’t introduce herself with a subtle handshake. It’s more like a visual slap to the face. Planes flying into the tiny airport kiss the spellbinding Remarkables Mountains. The Remarkables have been filmed in countless movies, most famously in the Lord of the Rings trilogy.

Bungy jumping, invented from the Kawarau River Bridge in 1988, spawned a wealth of adrenalized tourism, such as jet-boating with KJet, skydiving with NZONE, off-road jeeps tours with Nomad Safaris and helicopter rides with Over The Top. All are worthy pursuits, although I wasn’t willing to confront the fear-factor of tandem skydiving. Golfers will especially appreciate Over The Top for the chance to hit a few tee shots from a mountaintop cliff. The eco-friendly balls, made with a dog-biscuit-like inner core, decompose within weeks, leaving the environment undisturbed.

It’s only within the past five years that Queenstown has matured into a world-class golf destination, thanks to the additions of The Hills Golf Club in 2007 and Jack’s Point in 2008.

'This city (Queenstown) is the best locale for golf in New Zealand,' Wolfe said. 'The courses are so different.'

The lovely Queenstown Golf Club, dating to the 1970s, shares Lake Wakatipu’s shores with Jack’s Point, although its conditioning isn’t quite up to par. It’s still worth playing the cool holes along the water. Locals call Arrowtown Golf Club “narrow town” for its slim fairways.

Jack’s Point should be christened a “World Top 100” candidate. The routing by local real estate developer John Darby skirts the lake on holes 5-8. The par-4 at no. 15 invokes a Scottish or Irish links, playing over a sheep paddock and a stone wall before the fairway. The colorful parachutes of NZONE skydivers add even more distractions to this surreal setting.

'I’ve been on 19 of the top 25 golf courses in the world,' said Jack’s Point Superintendent Simon Forshaw. “I like to compare a little bit. We are as good as them. The views and turf conditions, we’ve got what it takes.'

In Photos: The golf courses and scenery of New Zealand

The Hills, an exclusive private club that offers some public play, started as a backyard par-3 playground for Sir Michael Hill until the famed jeweler went all in, hiring Darby to create a strong, thoughtful tournament venue that has hosted three New Zealand Opens and two New Zealand PGA Championships. Hills’ personal collection of sculpture art spread on the grounds culminates along the 18th fairway, where a pack of 110 cast-iron wolves surround a swordsman. Just don’t hit a tee shot into the fray.

Sir Bob Charles, the only Kiwi in the World Golf Hall of Fame, and Darby, who studied course architecture at Harvard University, collaborated on two solid resort courses on the island -- Millbrook near Queenstown and the Clearwater Golf Club near Christchurch. Millbrook’s original routing from 1993 improved when Greg Turner added a third nine, the Coronet, and redirected four holes in 2010. Now all three nines finish back at the resort center, where villas, fine dining at the Millhouse and a spa, pool and fitness complex entertain guests.

The 2011 opening of the Hilton Queenstown along the lake added another great hangout for golfers. The excellent eforea:Spa and Wakatipu Grill will tempt people to stay put, although it’s worth the short water taxi ride into Queenstown.

More than 150 restaurants and tons of trendy bars serve Queenstown and historic Arrowtown. Saffron’s ever-changing menu highlights Arrowtown, a tiny town founded by a gold rush of the adjacent Arrow River in the 1860s. More than 177 wineries dot the valleys and hillsides of the surrounding Central Otago region. The Gibbston Valley Winery takes wine-tasting to a new level inside a manmade “winecave.” The Amisfield Winery Bistro serves a fantastic “Trust The Chef Menu,” paired with plenty of pinot noir and sauvignon blanc, two New Zealand specialties.

It doesn’t take alcohol, though, to find Queenstown entirely intoxicating. 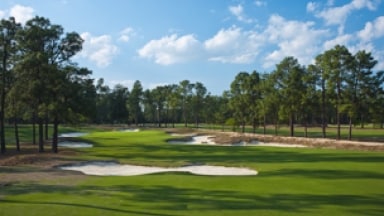 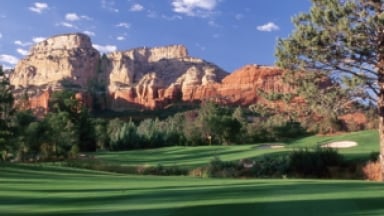