With Kerr and Lewis slumping ahead of Solheim, Inkster is waiting and watching 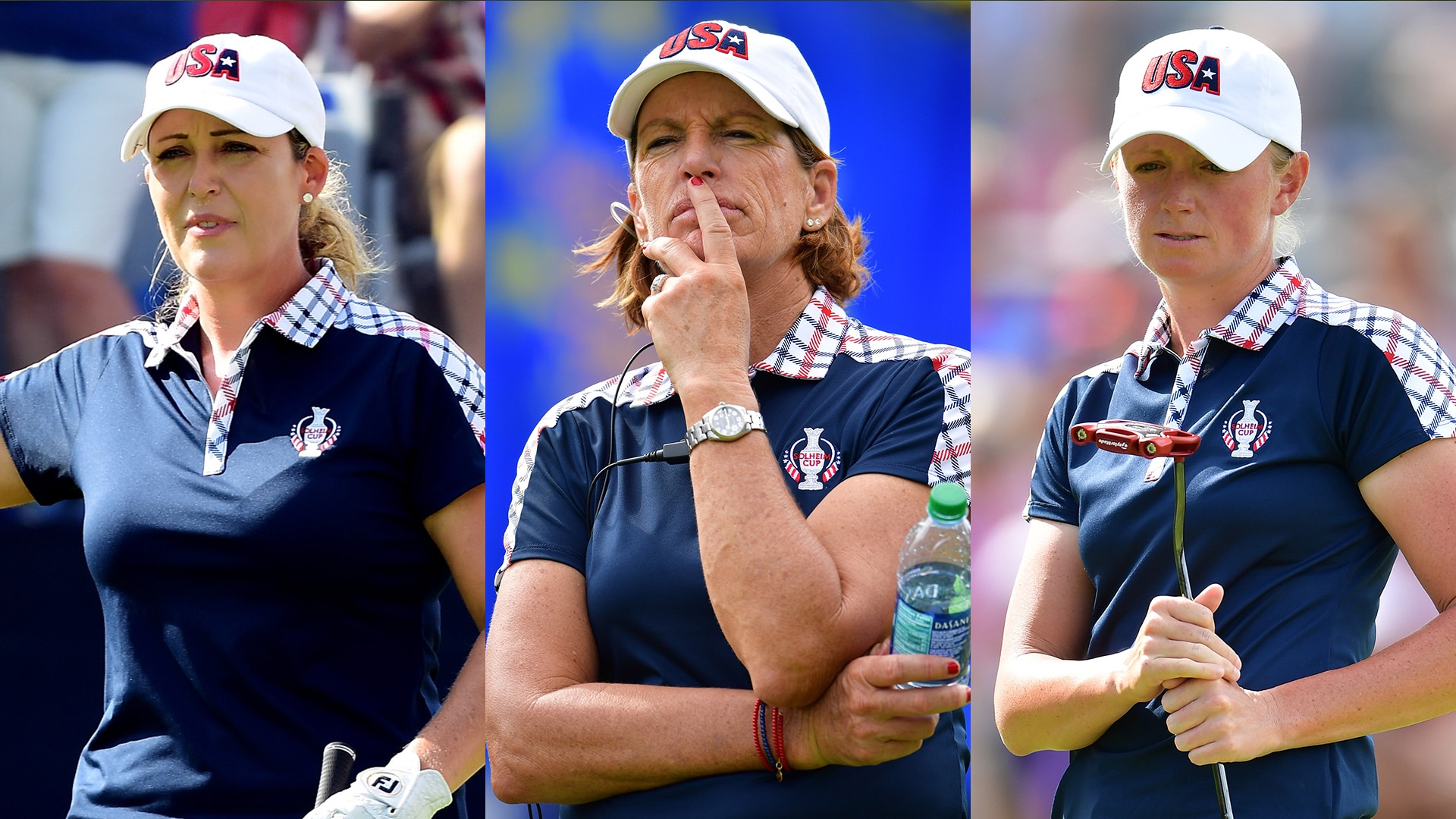 WOBURN, England – Cristie Kerr’s swing is uncharacteristically out of sorts.

She’s in a rare funk.

She left the AIG Women’s British Open frustrated Friday after missing the cut, knowing her U.S. Solheim Cup fate grows more uncertain with her back now firmly against the wall in her bid to make the team on points. She also missed the cut at the Evian Championship last week.

Kerr, 41, is the winningest American in Solheim Cup history, but she knows that doesn’t guarantee anything if she needs one of U.S. captain Juli Inkster’s two captain’s picks to make the team for the ninth time.

“Honestly, I don’t know where I stand with Juli,” Kerr said as she left Woburn following a pair of 75s. “I’m trying my best to make the team, but I’m not helping myself out.

“I know, given the opportunity, I will play well in that atmosphere. I’ve changed coaches, and I’m working on things. It’s more than a month till Solheim, and I have time. I’ll be ready. I know once I get in that environment, I’ll be awesome.”

Kerr has been part of a dynamic duo in team golf. She’s 11-1-2 paired with Lexi Thompson in Solheim Cup and UL International Crown play, but she struggled with Thompson in a team event at the Dow Great Lakes Bay Invitational last month. They tied for 33rd.

Kerr knows she isn’t making it easy on Inkster.

They are the most proven winners in this generation of American players, tough-minded and strong-hearted fighters who have both distinguished themselves in the game’s crucible, winning multiple majors, ruling in their time as world No. 1s and helping the United States win multiple Solheim Cups.

They looked like obvious choices as captain’s picks earlier this summer, if they didn’t qualify on points. Inkster, after all, needs veteran leadership to go with the wave of new faces she’s going to take to Scotland for a road game next month.

But Kerr and Lewis are both off their games.

With double points up for grabs at the Evian Championship last week and the AIG Women’s British Open this week, neither claimed a single point.

Lewis, still adjusting to life on tour as a new mom, also missed the cut at Woburn, shooting 78 and 76. She tied for 52nd at the Evian Championship. While Lewis finished third at the Marathon Classic three weeks ago, she missed the cut at the U.S. Women’s Open, KPMG Women’s PGA Championship and Dow Great Lakes Bay this summer.

Time is nearly out in their bids to qualify for the team.

With neither playing the Aberdeen Assets Management Ladies Scottish Open next week, they are down to the final qualifying event, the CP Women’s Open in two weeks. They are both scheduled to play, but each must win to have a chance to make the team on points.

Or, they’ll likely need top-3 finishes to have a chance to claim one of the two spots off the U.S. Solheim Cup world rankings list.

“They aren’t making it easy,” Inkster said. “But I’m still waiting for this to play out. There’s still a little time.” 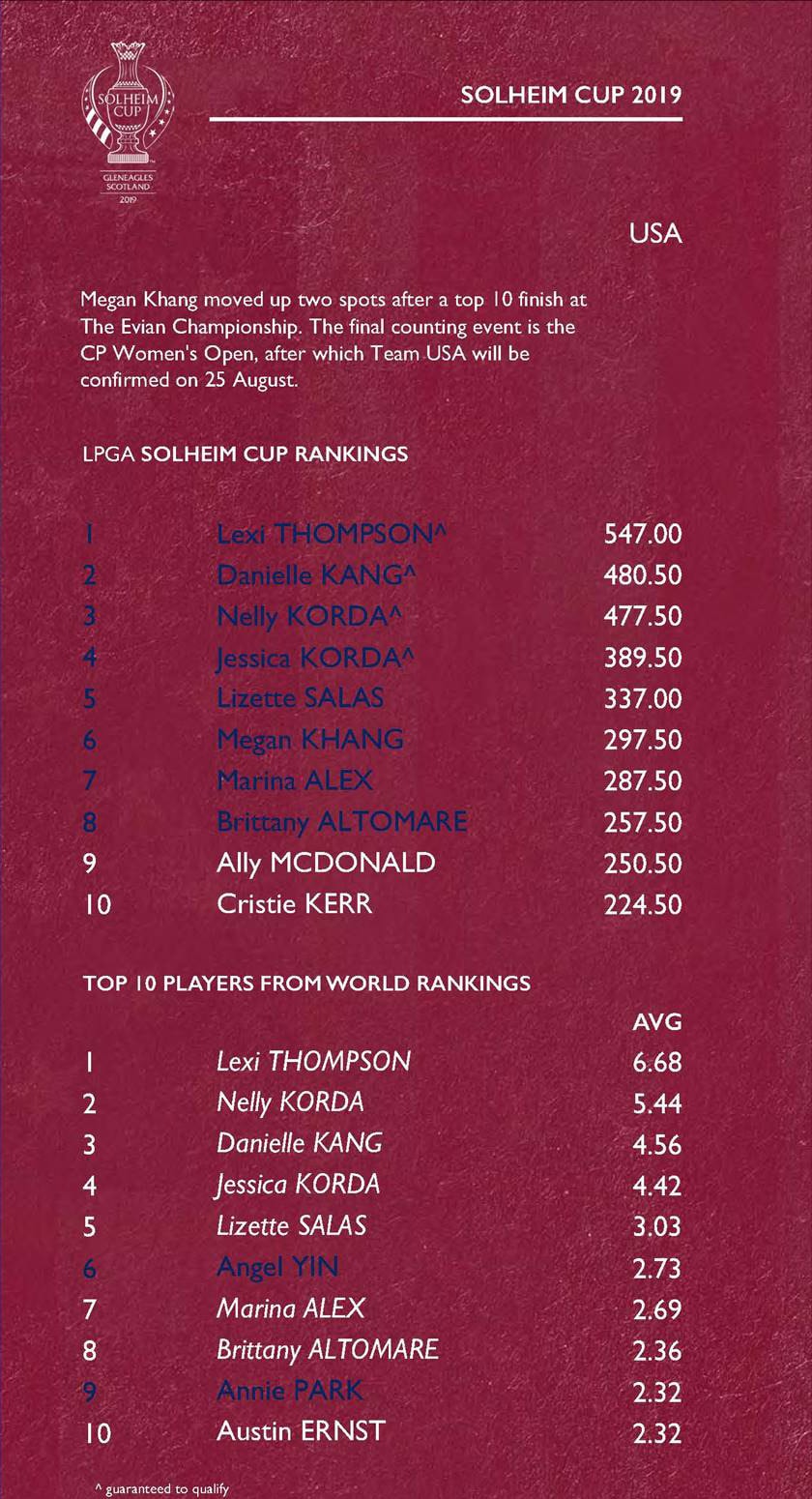 There’s a major overhaul to the American team coming, with Michelle Wie out with injury and Brittany Lincicome out on maternity leave. Solheim stalwarts Kerr, Lewis, Paula Creamer, Morgan Pressel, Gerina Piller, Angela Stanford and Brittany Lang are all outside the qualifying criteria.

If the American team were finalized today, Lexi Thompson, Danielle Kang, Nelly Korda, Jessica Korda, Lizette Salas, Megan Khang, Marina Alex and Brittany Altomare would make it on points. Angel Yin and Annie Park would make it off the world-rankings list. There would be five Solheim Cup rookies in that mix (Nelly Korda, Khang, Alex, Altomare and Park).

So Inkster would like to add veterans as captain’s picks, but . . .

“You know what?” she said. “There has to be a changing of the guard sometime.

“Yeah, it’s tough, because I have a lot of rookies, but I have to pick the two best player who can help the team. I can’t do it by name. I have to do it by how they’re playing, and how they match up with the team.

“I have to have a reason to pick a player, and I want those players to give me a reason.”

Creamer has played in every Solheim Cup since she joined the LPGA 14 years ago, but she missed the cut this week, and she didn’t pick up a Solheim Cup point after a strong start at Evian last week. Creamer did make an impression teaming with Morgan Pressel to finish T-6 at the Dow Great Lakes Invitational and with improved summer play.

“They are two veterans I’m also looking at,” Inkster said. “They are in the mix, but I would say Morgan a little more than Paula.”

Pressel didn’t just make the cut this week. She’s T-18 going into the weekend. Though she has four missed cuts this summer, including last week’s Evian Championship, she also has three top 10s in the last three months.

Inkster said she’s excited by how so much of her young, new cast is playing well.

Kerr is taking next week off, where she will get to work on her swing.

“Honestly, I don’t feel like my confidence is that bad right now,” Kerr said. “I have plenty of time to work on things and start hitting it good.

“I know I can help the team. It just depends on whether Juli feels like she needs me, or doesn’t need me. That’s up to her, and what she feels like she believes about me. I’m just going to try to do my best. That’s all I can do.”