Cut Line: Optimism for LPGA; Bifurcation for the PGA Tour? 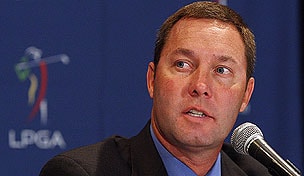 Call it a contingent cut. The PGA Tour may consider bifurcation of the Rules of Golf if the proposed ban on anchoring is approved later this spring; Phil Mickelson will address his tax fortunes in the future if he decides to vote with his feet; and the PGA of America would consider a more democratic selection process for its captains if . . . well, two out of three isn’t bad.

In this edition of Cut Line we make sense of what was a qualified week.

“We are extremely pleased with everything that is happening,” said Kann, his smile betraying how understated his take actually was.

On the same day, the tour announced it was adding a new, match-play event to its schedule in 2014 that will feature the game’s top players in a team format. The International Crown is just another baby step forward for a circuit that has cornered the market on “most improved” since Michael Whan took over as commissioner in 2010.

Whan & Co. have succeeded where many before them have failed in making the LPGA relevant. Now if only Kann would stop smiling.

Options. Few in golf can say so much without saying anything at all, but PGA Tour commissioner Tim Finchem spoke volumes when he addressed the media following Tuesday’s mandatory players’ meeting at Torrey Pines.

With discontent growing among his constituency regarding the potential ban on anchoring, the commish left the door open to the possibility of bifurcation – or two sets of rules for amateurs and professionals.

“It certainly wouldn't be our objective. Our objective is to follow the rules and keep the rules together. Now, having said that, the whole question of bifurcation is always out there to be discussed,” he said. “Personally, I think in some situations bifurcation is OK.”

If that doesn’t exactly sound like a rousing endorsement for bifurcation consider Finchem’s unique dilemma. He has never wanted to be in the rulemaking business because of the inherent risks of creating regulations that benefit certain players while hurting others, but the anchoring debate has struck a nerve. As a result, the commish has decided an inflexible corner is no place to be and that it is always better to have options.

Lefty field. Regardless of which side of the political isle you reside and independent of the reality that all Americans are spending extra time studying the tax bill these days, Phil Mickelson’s foray into the world of tax-and-spend last week was ill-advised.

“My apology is for talking about it publicly, because I shouldn't take advantage of the forum that I have as a professional golfer to try to ignite change over these issues,” said Mickelson following comments last Sunday that suggested California’s new tax laws may require “drastic changes” on his part.

Few in the game are as PR savvy as Mickelson and his Wednesday mea culpa at Torrey Pines likely netted him more fans than he had before he launched into his dissertation on taxes at the Humana Challenge.

But for Lefty the lesson is clear: if California’s taxes are too high, pack up and more to Florida or Texas or one of the nine states without state income taxes like dozens of other Tour types. Sometimes the most powerful statements are made without saying a word.

Select audience. Following last week’s announcement that Paul McGinley would lead the European Ryder Cup team in 2014 at Gleneagles some, including your scribe, suggested that a similar selection process could benefit the U.S. side.

Ten members of the European Tour Tournament Committee voted unanimously for the Northern Irishman in ’14, although the debate was equal parts contentious at times and extremely public compared to how the U.S. selects captains.

PGA of America president Ted Bishop responded to those suggestions on Thursday and stressed that there was plenty of player input into the selection of Tom Watson to lead the ’14 team.

“It was a unanimous decision that Paul (Levy, PGA secretary) and Derek (Sprague, the association’s vice president) and I made, and it went with a lot of thought,” Bishop said.

Bishop also said that many former captains contacted him after the U.S. loss at Medinah last year, but the fact remains the ultimate decision was made by three hardworking and dedicated men who have nonetheless never played in a Ryder Cup and will not be between the ropes at Gleneagles.

This is neither an indictment of past U.S. captains or Watson, who by all accounts was a brilliant selection. Yet there is no denying that a structure that draws a captain directly from those who will be captained has worked well for the Continent in recent years. Getting U.S. players similarly involved with the selection is certainly worth consideration.

Tweet of the week: @Steve_Flesch “At the PGA Merchandise Show now. I obviously missed the ‘Free Navy Sport Coat’ stand when I walked in. #stiffs”

In related news, Flesch informed Cut Line on Friday that he doesn’t own a navy sport coat, so there you go.

Quite Rors. It was never going to be fair for Rory McIlroy. The glitzy Monday announcement, the hype surrounding the Ulsterman when he showed up on the first tee last week in Abu Dhabi with a full lineup of Nike Golf gear in his bag, it was always going to be a difficult debut.

That McIlroy switched back to his old Titleist Scotty Cameron putter for Round 2 in Abu Dhabi only fanned the flames of instant analysis and, as he has in the past, the world No. 1 handled the scrutiny with honesty and aplomb.

“He put 14 clubs in the bag and hadn’t played in two months,” said Dave Stockton Sr., McIlroy’s putting guru. “He’s pumped about the clubs. He has no question he can use those clubs, I just think it was a little bit early.”

Growing pains like last week’s missed cut in Abu Dhabi were always going to be the pitfalls of such a wholesale jump and Stockton’s take will likely be prophetic in the coming weeks, but in the punch bowl where McIlroy now resides every missed cut will only heighten the scrutiny.

As unfair as it all seems, this is McIlroy’s new reality and perhaps the greatest challenge of his young career. 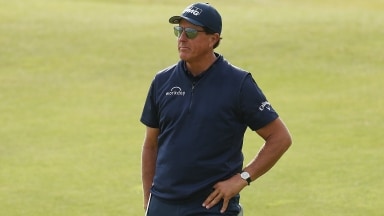