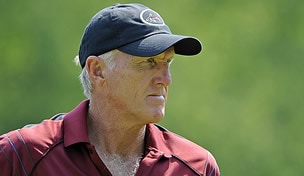 Getty Images
LA JOLLA, CA - FEBRUARY 05: Brandt Snedeker hits out of a green bunker during the 1st Round of the Buick Invitational at the Torrey Pines North Course on February 5, 2009 in La Jolla, California. (Photo by Donald Miralle/Getty Images)  -

For the 27th time in the last 28 seasons, the Hyundai Tournament of Champions opens the PGA Tour calendar on Friday yet there is a very real sense of aloha (it means hello, and goodbye) to this week’s proceedings.

Next season will begin at October’s Frys.com Open as the circuit transitions to a split-calendar schedule pushing the winners-only event deeper into the annual run and prompting some to wonder about the TOC’s place in the new order.

Good faith. Labor disputes have a nasty way of chasing the innocence from sports (see: NHL, 2012-13 season), but Cut Line was warmed this week to find the high road occupied amid what is turning into a difficult situation for the PGA Tour and its rules officials.

The circuit and the rules officials union failed to reach a new agreement when the old one expired last month, but officials showed up for work at this week’s opener in Kapaula and plan to continue to work despite the unrest.

Although the attorney for the rules officials’ union did not rule out the possibility of a strike, or a lockout, it is an encouraging sign that the show goes on despite the dispute.

“We would never do that (strike) to the players or the fans,” one rules official told Cut Line this week. “We love what we do.”

Tournament of (missing) Champions. In fairness, this week’s TOC boasts nearly an 80-percent participation rate. That’s better than nearly any other event outside the majors and World Golf Championships, yet the inevitable focus at Kapalua is on who is not there.

Of the 37 different winners last year on Tour, 30 are at the opener. That it is world No. 1 Rory McIlory, No. 2 Luke Donald and No. 3 Tiger Woods who are among the no-shows, however, is a body blow that is difficult from which to recover.

Maybe it’s the venue or the Kona winds or simply the timing of the TOC so close to the holidays, but the event continues to have the feel of an All-Star game that is missing a couple MVPs.

Captain’s call. The PGA of America’s move to name Tom Watson captain of the next U.S. Ryder Cup team has created an interesting chess match for the Europeans, who will name the 2014 skipper for the Continent later this month in Abu Dhabi.

In December, Darren Clarke, one of the leading candidates for the ’14 gig, suggested Europe would need a “big presence” captain to match Watson and some considered that a call for Colin Montgomerie to have another turn at the big chair.

The idea is that the Scot, who never lost a singles match in eight Ryder Cups, would somehow mitigate Watson’s popularity with the Scottish galleries at Gleneagles. But Cut Line spent some time at the ’14 Ryder Cup venue last year and it should be pointed out that Monty is not as popular of a pick at home as one would think.

Let the Games begin. It is concerning that the first headline of 2013 regarding McIlroy was a report that he may skip the 2016 Olympic Games in Brazil in an attempt to not “upset” anyone with his decision to play for either Ireland or Great Britain.

It seems returning golf to the Olympics was the easy part. Keeping politics out of the game is the real challenge.

Shark bait. That the membership at Medalist Club didn’t want Greg Norman involved in the redesign of the South Florida layout is understandable (the Shark’s design philosophy isn’t for everyone).

That Norman would have his feelings hurt, and even ask that his and co-designer Pete Dye’s name be removed from the course, is also understandable.

What stretches the boundaries of acceptable behavior, however, is news that Norman has requested that the clubhouse be cleared of any of his memorabilia, including the signature shark above the bar in the men's locker room, according to Golf Channel insider Tim Rosaforte.

Someone seems to need a timeout, or a hug.