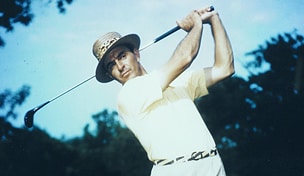 Getty Images
ORLANDO, FL - MARCH 28: Tiger Woods waits on the second hole during the third round of the Arnold Palmer Invitational at the Bay Hill Club & Lodge on March 28, 2009 in Orlando, Florida. (Photo by Scott Halleran/Getty Images)  -

In this new Grill Room feature, we're taking a look back through time at interesting or unusual moments in golf history.

On this day 51 years ago, Sam Snead became the first – and only – man to win an LPGA event by claiming victory at the Royal Poinciana Plaza Invitational in Palm Beach, Fla.

Not that there have been many opportunities for other men to match this feat. The rules have changed quite a bit since 1962.

Snead was the only man in the field that included just 14 LPGA players, and had to come from behind on the final day to defeat Mickey Wright by five strokes at the Palm Beach Par-3 Golf Club.

“The pressure was double this time. The man is expected to win,” said Snead.

For anyone thinking this was the official end of chivalry, don't panic; Slammin' Sam showed nothing but the utmost respect for his competitors after the round.

“That Mickey Wright is the Babe Zaharias of the women’s tour. The LPGA might just push her off on us (PGA Tour) and she’s good enough to play with us, too.”