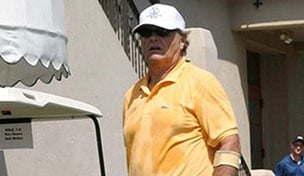 On this date 20 years ago, Academy Award-winning actor and golf enthusiast Jack Nicholson pulled out his 2-iron … and used it to smash in the windshield of a car he claimed cut him off in traffic.

Charges of misdemeanor vandalism and assault were eventually dropped after Nicholson apologized and reached an undisclosed settlement with the victim.

The iconic actor who would star years later in "Anger Management" eventually called the episode "a shameful incident in my life," and explained that a great deal of stress caused by a close friend’s death coupled with the pressure of shooting his most recent movie led to the outburst.

Although there was some initial confusion over what club Nicholson used, he cleared it up in a 2007 interview with Golf Digest, saying he specifically selected the 2-iron because it was a club he never used on the course.

That should be a good lesson for everyone out there: Leave the 2-iron in your bag; you never know when you might need it.