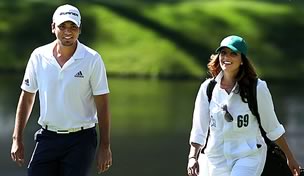 Jason Day and his wife, Ellie, are expecting their first child, according to Australian golf presenter Luke Elvy. Ellie shared the news with Jason on Nov. 12, his 24th birthday and day of the third round of the Australian Open.

After finishing T-4 at The Lakes, Day went 1-3-1 in the Presidents Cup at Royal Melbourne the next week.

Day won the 2010 Byron Nelson Championship and finished runner-up in the first two majors of the season in 2011.

The couple married in October 2009 in her native Ohio, where they now reside.