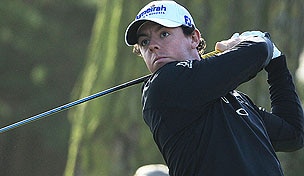 Getty Images
SAN FRANCISCO, CA - JUNE 15: Rory McIlroy of Northern Ireland hits his tee shot on the 11th hole during the second round of the 112th U.S. Open at The Olympic Club on June 15, 2012 in San Francisco, California. (Photo by David Cannon/Getty Images)  -

SAN FRANCISCO – Rory McIlroy’s first title defense of a major championship was sloppy and ended with a weekend off.

McIlroy was out of sorts from the beginning of the week at the U.S. Open and his rounds of 77-73 for a 10-over 150 total at The Olympic Club earned him a fourth missed cut in his past five events.

The 2011 U.S. Open champion who won last year at Congressional by a whopping eight shots has struggled mightily dating back to The Players. Many had thought that he had put his confidence issues behind him last week with a better showing at the FedEx St. Jude Classic, where even though he made double bogey on the final hole, he still tied for seventh place, but that clearly is not the case.

“It wasn’t the way I wanted to play,” McIlroy said. “It’s just such a demanding golf course and just punishes the slightest shot that’s off line or that’s maybe not the right distance. You have to be so precise out there and if not you’re going to get punished.”

McIlroy, 23, had a fighting chance of making the cut on his last hole Friday but three-putted and made bogey, which include a missed 3-footer for par.

For the week McIlroy made 13 bogeys and three birdies.

Purse and FedExCup points breakdown for CJ Cup champion Rory McIlroy and the rest of the field.