It's not just snowy in Tucson: Three new happenings to the area golf scene 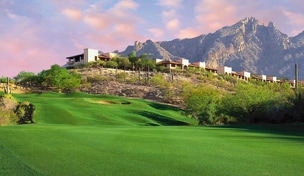 TUCSON, Ariz. -- Poorly timed snow storms aside, Tucson is set to have a great golf year in 2013 thanks to a handful of new developments. One resort is wrapping up extensive renovations, a prestigious private club is opening its tee sheet and even a brand new golf course is coming to southern Arizona.

Next to Dove Mountain, The Gallery Golf Club opens its tee sheet

Across the street from the 27-hole Ritz-Carlton Dove Mountain Golf Club is the The Gallery Golf Club, a private 36-hole facility that began offering a limited amount of public tee times on both the North and South courses this year.

The Gallery was the first high-end golf club to come to Marana just north of Tucson, opening its first 18 in 1998. After initiatively offering some public preview play in its opening years, the club went fully private until now. Current operations, which were assumed by Troon Golf last fall, call for alternating public tee times between the North and South courses daily.

Currently, morning rates are $169 while twilight rates are $79 and can be booked on their website. The North Course checked in at No. 25 on Golf Digest's Best-in-State rankings in Arizona for 2011-12, while the South hosted the WGC Accenture Match Play in 2007-08 before it moved to Dove Mountain. Along the foothills of the Santa Catalina mountains is the rejuvenated Westin La Paloma Resort, a 497-room hotel that shares 250 acres with La Paloma Country Club and the 27-hole Jack Nicklaus-designed golf course. In 2010, the property filed for Chapter 11 bankruptcy protection, and is now emerging on the other side with extensive, $30 million enhancements that are touching just about every part of the property. Nearly all guest rooms have been entirely redone to this point, while the resort's pool area, slated to reopen April 19th, is the last major component to be finished.

The golf course, open only to members and hotel guests, helped usher in Tucson's high-end course boom in the mid-1980s. It recently completed a full renovation of its greens and bunkers (but are still far more different than Jack's topsy-turvy greens at Dove Mountain up the road). Now seeded with Miniverde Bermuda, La Paloma's greens are no longer over-seeded in the fall like most other area courses. Instead, greenskeepers apply a dye applicant that keeps them green and pure rolling throughout the winter without browning. The practice not only helps green health and saves water but also bids transition periods in the spring and fall adieu. Southern Arizona will be the site of a rare brand new course opening in the United States this year, Sewailo Golf Club. This course will be an amenity of the Casino Del Sol, located southwest of Tucson on Pascua Yaqui Tribe property. The 215-room casino hotel, which opened in 2011, features seven restaurants and seven bars to go with live table gaming and slots. Outside, a large pool area is the centerpiece for warm weather fun to go along with a 5,000 seat amphitheater that attracts big acts like Van Halen, Don Henley and James Taylor.

“We started with a completely flat piece of desert terrain and created a dramatic golf course winding seamlessly through rolling terrain,” Butler told the American Society of Golf Course Architects recently. “Notah and I worked hard to create a mix of superbly crafted strategic holes combined with a wonderful range of shot values and aesthetics.”

The course will be accompanied by a Jack Nicklaus Academy housed in the practice range's 2,000-square-foot, climate-controlled teaching facility.

Sewailo is scheduled to open in July, which isn't exactly peak golf season in southern Arizona. That said, snow shouldn't be in the forecast on opening day.