Don't forget about the 2001 Masters, the one that won the Tiger Slam 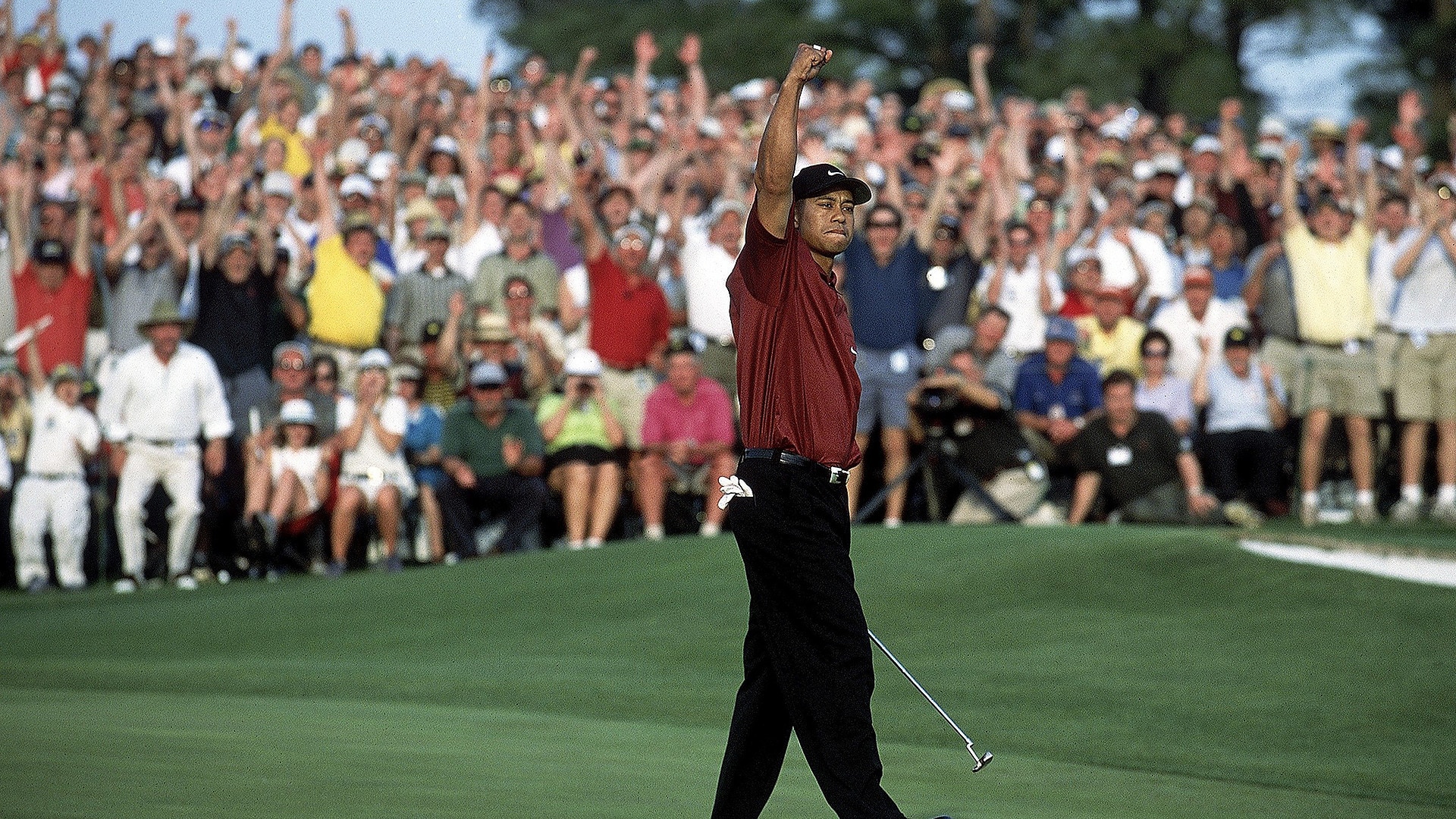 Story goes, that in May of 1999, ahead of the Byron Nelson event, Tiger Woods called Butch Harmon and said, “Butchie, I got it.”

Woods had been working for nearly two years on a swing that would be better than the version that won him the Masters by 12 shots.

It was an endeavor for perfection and, as close as anyone could get it, Tiger got it.

Woods won 16 of his next 28 PGA Tour starts after that revelatory phone call, including four majors. He bagged the '99 PGA, placed fifth at the 2000 Masters, and then made a Secretariat-like gallop over the remainder of the year.

U.S. Open at Pebble Beach by 15. Open Championship, to complete the career Grand Slam, by eight. PGA Championship in a playoff thriller.

That trio lives in golf lore. But there are four majors in a slam, regardless of order, Grand or Tiger, and that fourth victory is often overlooked when we reminisce over all the treasures in Woods' vault.

Tiger Woods ran an assembly line of defining moments, so many that they can be debated and ranked.

Grand Slam is in quotes because not everyone views Tiger’s four consecutive major wins as an official slam, but that’s the Sunday scenario of the 2001 Masters.

Tiger Woods vs. Phil Mickelson, head to head, in the final group, in the final round at Augusta National. Woods vying for a once-in-a-lifetime feat, Mickelson still in search of his first major title. A prime David Duval in there, too.

And yet, this victory ranks a clear fourth in the Tiger Slam pantheon, in public eyes. It may well be perceived fourth among his Masters wins, behind ‘97, ‘19 and even ‘05.

But before we sing the praises of the event that signed off on history, we ask: What is a slam?

Do you have to win all four majors in a calendar year? Does the order matter as long as you own all four trophies at one time?

Woods never argued against the merits of a single-season slam. He said the traditional version was more difficult to accomplish, because a player had to first win the Masters – no second chances. And he said this repeatedly, asked event after event, from the time he left Valhalla until well after he existed Augusta.

But if I have all four trophies on my mantle at one time, he always added, you can call it whatever you want. 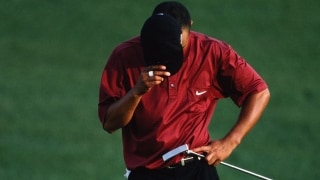 Tiger covered face in victory, as others did in defeat

Recalling Tiger Woods' 2001 Masters victory, he made us feel like nobody had a fighting chance if he was near the top of the leaderboard late on a Sunday.

In defense of the Tiger Slam, consider that the major season, at the time, stretched from April to August. To win each one required more than just a hot streak, certainly, but is it no less impressive that eight months after winning major No. 3, Woods claimed No. 4?

That’s eight months for his game to go AWOL, for complacency to set it, for the media to erode his patience with redundant questioning, for the pressure to cause an explosion – or implosion.

But much like you might have seen in Michael Jordan during “The Last Dance” documentary, Tiger was a different cat.

On top of superior physical talent, he possessed an insatiable desire to win. Insatiable may not even be strong enough to describe what drove Woods, for after wrapping the 2000 major season with a third consecutive victory, what does Tiger do? He plays the following week in Akron and wins – wire-to-wire, by 11 shots (remember the Sunday shot in the dark?). And then he wins in his next start in Canada (remember the bunker shot on the 72nd hole?). That’s more than just being the best player in your sport; that’s possessing a determination normals can’t fathom.

At the Mercedes Championships, ahead of the 2001 season opener, this question was posed to Woods:

Q. Would say, "I don't care if I win another tournament this year. I'll just win the Masters"?

Tiger: “I couldn't live with myself if I said that. It wouldn't be me.”

Woods didn’t repeat at Kapalua and, dating back to the end of 2000, went eight consecutive Tour events without a win. That was considered a slump back then. Slump was written. Slump was spoken. And slump was heard.

Woods ended this “drought” at Bay Hill. He then won the next week at TPC Sawgrass.

When NBC Sports’ Jimmy Roberts asked Woods what winning his first Players Championship meant to him, Woods said without a hint of sarcasm: “It means my slump is over.”

Take the above, add in the opportunity for – literally – a unique feat, and combine it with what’s below, and Woods winning this event deserves more than just token status in his otherworldly career.

You’d think that when Tiger teed it up Thursday at Augusta National, where he hadn't won in four years, that there would be nerves or anxiety, those little doubt-causing devils.

“I guess, the things I have to deal with off the golf course … it is difficult at times, but getting out there and competing and playing and challenging yourself to reach another level, and hit good golf shots when you absolutely have to – that, to me, is the thrill of it,” Woods said in his pre-tournament presser.

Woods shot 2-under 70 in Round 1 and was T-15. He shot 66 in Round 2 and was T-2. A Saturday 68 gave him a one-shot lead over Phil Mickelson, with Mark Calcavecchia and Chris DiMarco two back. David Duval, Ernie Els and Angel Cabrera were three back.

Q. Is this the way you would have scripted it, one-shot lead, playing against the No. 2 guy in the world?

Q. How would you have scripted it?

Tiger: Ten (shots). Why limit yourself to 10? If you're going to dream, might as well.

Q. The historical implications of tomorrow, are you thinking about that at all or are you just totally shutting that out?

Tiger: I haven't thought about it. I'm kind of thinking about my swing right now. Going to go to the range and work on it. Sorry. (Laughter.)

Q. Come on. Give us something better than that. This is something a lot of us may never see again in our lifetime if you win again tomorrow. Has that entered into your mind?

Tiger: I hope you live a little longer, then. (Laughter.)

Woods, unsurprisingly, started Sunday with a bogey at the first. That hole has long had his number, and thus, No. 1 and No. 2 – along with Calc – were T-1.

This was never a certainty. Fate and Destiny were onlookers like us, waiting to be wowed. Woods never held a multiple-shot lead until he birdied the 18th for a two-stroke victory. He was tied with Duval, through 15 holes, with Mickelson one back. But Duval and Mickelson bogeyed the par-3 16th and Woods played the final three holes in 1 under.

After making his 15-foot, slam-winning putt, Woods raised his right fist victoriously. He then walked to the edge of the green and buried his face into his hat. It was his most human moment during a time where he never looked less mortal.

“I was in such a zone today, working on, you know, every shot, working so hard on every shot. Then I walked over to the side and I just started thinking, you know, I don't have any more shots to play. I'm done – I won the Masters,” Woods said after his fifth major win in six starts. “It was just a weird feeling, because, you know, when you are focused so hard on each and every shot, you kind of forget everything else. When I didn't have any more shots to play, that's when I started to realize what I had done; I won the tournament, and I started getting a little emotional, and trying to pull it together. That's why I put the cap over my face, to pull it together, so that when Phil made his putt, I was able to shake his hand.”

The parts have always outshined the whole of winning the Tiger Slam. The guy won a U.S. Open by 15 shots – at Pebble Beach. He won an Open Championship by eight shots to become the youngest player to complete the career Grand Slam – at St. Andrews. He won the PGA Championship in one of the most exciting final rounds ever.

But not to be forgotten is the capper. Because it’s not just that Woods went head to head with his primary rival on Sunday at Augusta National and beat him; it’s the totality of that victory – so many things that we would consider overwhelming burdens that Woods either shrugged away, used at motivation or just shone through.

Woods didn’t celebrate much after completing the Tiger Slam. The 25-year-old packed his bags, went home to Orlando and “stayed in bed for about four days. Had 102-degree fever; had the flu pretty good,” he said in his follow-up start in Dallas, the event where he "got it" two years earlier.

For a period of time, however – just over two months – Tiger Woods held possession of all four major trophies (and The Players Championship Waterford Crystal).

And he could arrange them on his coffee table, on a mantle, or above his fire place, in any order in which he chose.