Double eagle: The golf term that makes no sense 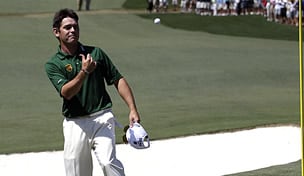 AUGUSTA, Ga. – Gene Sarazen hit ''the shot heard 'round the world,'' holing out with a 4-wood from 235 yards in the 15th fairway at Augusta National in 1935. He put a 2 on his card, made up a three-shot deficit with one swing, and then beat Craig Wood in a playoff the next day.

It was the shot that put the Masters on the map.

And it led to a golf term that was made in America, used only in America, and doesn't make a lick of sense.

The golf writers deserved a double bogey for that one.

On every other continent where golf is played, a score of 3 under par on a hole is known as an albatross.

Where the term ''double eagle'' came from is one of golf's mysteries, and it simply doesn't add up. A birdie is universally known as a score of 1 under par on a hole. An eagle is 2 under par. Double that –  a double eagle – and it would be 4 under par.

''That's American mathematics for you,'' Hunter Mahan said. ''That's why we're 40th in the world or whatever. I think albatross sounds cool.''

By whatever name, it's one of the rarest shots in golf. And it returned to the conversation last year at the Masters when Louis Oosthuizen made an albatross on the second hole of the final round. He hit 4-iron from 253 yards, the first 2 on that hole in Masters history.

Masters officials dug up a few newspaper articles from its archives on this great moment in time. Grantland Rice, the foremost sports writer in America of his era and a member at Augusta National, wrote this for the Atlanta Constitution:

''And then as he swung, the double miracle happened. The ball left the face of his spoon like a rifle shot. It never wavered from a direct line to the pin. As it struck the green, a loud shout went up. Then suddenly (it) turned into a deafening, reverberating roar as the ball spun along its way and finally disappeared into the cup for a double eagle 2 – a 2 on a 485-yard hole when even an eagle 3 wouldn't have helped.''

''I didn't know what a double eagle was until I came to the United States,'' Geoff Ogilvy said. ''I might have read the term. That's weird. I guess they can't think of a word for something better than eagle so they call it a double eagle. But it's not really a double eagle. It's an eagle-and-a-half. I always liked albatross. It's a good bird, isn't it? They fly across oceans. It's grand, which is what describes the shot.''

What did Sarazen make on the 15th hole?

''That was a double eagle,'' John Senden of Australia said with a big smile.

Senden knows better. He used the American term in this interview ''because I'm talking to you.'' He made an albatross on the par-5 second hole at TPC Boston in the Deutsche Bank Championship a few years ago and his caddie – Grant Berry, who is English – was appalled when he saw the reference to ''double eagle'' the next day.

''Growing up it was always an albatross,'' Senden said. ''I never knew it was anything different until I was maybe 15. I was watching an American telecast. You know what it was? I was watching the Masters and they were talking about Gene Sarazen and the double eagle.''

The Masters is such a powerful force in golf that ''double eagle'' sadly has become ingrained in the golf vernacular in America. It reached a point that even Oosthuizen, who hails from South Africa, said after the final round last year that it was ''my first double eagle ever.'' But then, that's how the question was posed to him.

Golf went to the birds long ago.

The phrase ''birdie'' comes from a conversation with Abe Smith, who was playing golf at the end of the 19th century with his brother and George Crump, who later built Pine Valley. They were playing the par-4 second hole at The Country Club in Atlantic City when Smith's second shot landed inches from the hole. He is reported to have said, ''That was a bird of a shot,'' and thus referred to it as a birdie when he holed the putt for a 3.

The U.S. Golf Association says on its website that ''eagle'' became an extension of a score better than a birdie.

By pure definition, a double eagle would be making a hole-in-one on a par 5 for a score of 4 under par. Such a score has been recorded four times, the most unusual by Shaun Lynch, a 33-year-old Irishman. He hit a 3-iron over hedges 20 feet high on the horseshoe-shaped par-5 17th hole at Teign Valley Golf Club in England in 1995. It ran down a slope and into the hole for a 1.

The shot was commemorated by a plaque.

''From this tee Shaun Lynch smote a golf ball into the hole. It was witnessed by two members and certified by Guinness Book of Records.''

No one would have called that a double albatross. There's no such thing in life. Is there?