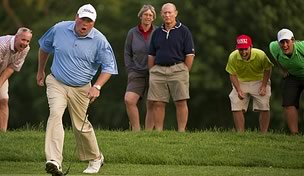 Getty Images
KAPALUA, HI - JANUARY 08: Geoff Ogilvy of Australia hits a shot during the second round of the SBS Championship at the Plantation course on January 8, 2010 in Kapalua, Maui, Hawaii. (Photo by Sam Greenwood/Getty Images)  -

COLUMBUS, Ohio – In the waning light of golf's longest day, Dennis Miller had his moment in the sun.

Miller arrived at the 18th green at Scioto CC, on the fourth hole of a four-man playoff for three spots in the U.S. Open. The 42-year-old had hit a 330-yard drive to start his 40th hole of the day. His aggressive approach to the back-right pin on the firm green had rolled to the back fringe.

In better shape than the remaining participants, Scott Piercy and Justin Hicks, Miller lined up his 25-foot birdie putt with the circa 1992 Maxfli Tad Moore putter he put in his bag Monday morning.

Miller struck the putt. The pace was perfect. The line was true. It should have gone in, but it stopped on the edge of the cup. A collective groan came from the crowd of 75 around the green.

Maybe it was the rumble of noise, or a gust of wind, but as Miller walked, head down in dejection, to his ball, it disappeared into the cup.

The crowd roared. Miller looked up to see his destiny and celebrated with fist pumps.. After 12 attempts to qualify for the U.S. Open, including seven times at sectionals, Miller was finally in.

As he walked off the green, the gallery pressed in to shake his hand, pat him on the back and wish him well. One of us had gotten into the U.S. Open. It was time for every man to celebrate the everyman.

Miller, the director of golf for Mill Creek (Ohio) Metro Parks for the last dozen years. wasn't even supposed to be in the field here. He had made the trek from Youngstown, Ohio, as the third alternate. He was informed that another player's withdrawal had made room for him in the field, about an hour before he teed off at 7:50 a.m.

Playing Scioto and the Ohio State University Scarlet Course, Miller finished 36 holes at even-par 141.That put him into a playoff.

After starting with a routine par, Miller sank a 6-foot par putt at the second hole to stay alive after first alternate Morgan Hoffmann made birdie to lock up the first of the three spots.

Miller's luck seemed to run out at the third playoff hole when he was bunkered off the tee of the par 3 and faced a 15-footer to save par. He poured the putt right in the heart of the hole.

Then came the final hole, and the putt that didn't seem to want to go in, then did.

'He's like a good wine,' friend and caddie Kirk Hough said. 'He gets better with age.'

Miller is extensively involved in junior golf, working long hours to expand the junior program back in Youngstown, sacrificing time with his wife and 5-year-old son, Nathan.

This good guy didn't finish first. But, in this case, 15th was just as rewarding.

Qualifiers and scores from the 11 U.S. Open sectional qualifying sites. 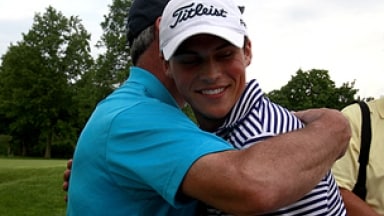 Many names may be unfamiliar, many faces unrecognizable, but these are the ones who survived Golf's Longest Day for a U.S. Open berth. 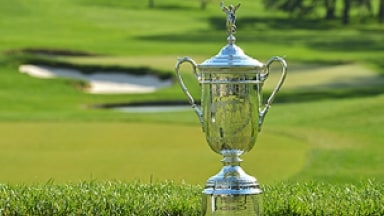 Video updates from each of the 11 U.S. Open sectional qualifying sites.