Drives of the Week: The Players Championship 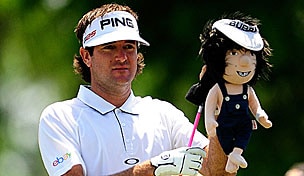 Each week, GolfChannel.com will take a detailed look at the players who pounded the farthest and fastest tee shots on the PGA Tour. Here are the four most important distance-related stats from The Players Championship, won by Tiger Woods:

Distance isn’t paramount at TPC Sawgrass, but Flores still managed to unleash a big drive on the difficult, 481-yard 14th hole on the Stadium Course. He still bogeyed the hole, and the 31-year-old failed to play the weekend, shooting rounds of 76-72. His drive was the shortest chart-topper since Sean O’Hair’s 355-yarder at Pebble Beach.

This was the second time this season that the Australian topped this category (Waste Management Phoenix Open), and he tied for 19th at Sawgrass. The longest this season in this category is Graham DeLaet’s 324.2-yard blast at PGA National.

The big-hitting Watson struggled all week at Sawgrass, managing only a T-37 at The Players. But he appears in this category for the first time since Phoenix, where he topped out at 122.48 mph.

Not surprisingly, Watson also topped this category for the third time this season, after also having the highest ball speed at both Doral (181.32 mph) and Phoenix (181.89). Charlie Beljan’s 184.90, in Houston, is still the best this year.