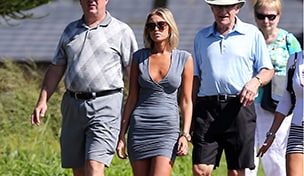 Dustin Johnson reportedly had a secret weapon at Kapalua, and it had nothing to do with his new TaylorMade equipment.

No, the uber-talented 28-year-old, who earned $1.1 million for beating 29 other players en route to a four-shot victory at the season-opening Hyundai Tournament of Champions, was spotted with a new lady friend.

Paulina Gretzky, the daughter of hockey legend Wayne Gretzky, was seen following Johnson up and down the rolling hills on the Plantation Course.

Who is Paulina Gretzky, you ask?

She is a 24-year-old model, actress and singer. In 2011, she reportedly took down her Twitter account – it has since been restored – after her famous father noticed the racy self-photos she was posting.

Take a deep breath, and search her on Google. Exhale. Take a sip of water.

When asked about the possible dalliance Tuesday, Johnson told panting scribes in Hawaii, “I don’t know who you’re talking about.”

And then he smiled.