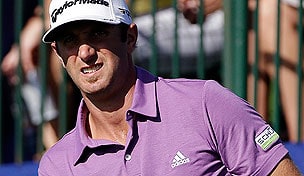 KAPALUA, Hawaii – It wasn't the BCS National Championship. It wasn't 'The Bachelor' season 17 premiere. But Monday in Kapalua was a long day of golf that was a long time coming.

After severe winds kept players from competing for three days, the 30-man field at the Plantation Course played 36 holes in what is believed to be the first-ever Monday start on the PGA Tour. Blood, sweat and what felt like years later, the 2013 season kicked off and closed in on a champion among champions all in the same day.

After sharing the first-round lead at 4 under alongside Mark Wilson and Nick Watney, Dustin Johnson posted a red-hot 7-under 66 in his afternoon 18.

Johnson's second-round 66 put him at 11 under total and three shots clear of Steve Stricker through 36 holes at the Hyundai Tournament of Champions.

'We had not played any golf at all, so I was ready to go,' Johnson said. 'This course is a tough walk and it's really windy out there, but I'm in pretty good shape. I can handle (36 in one day).'

With 18 holes left to play Tuesday at the weather-shortened event, Johnson may have history on his side. Of Johnson's six PGA Tour wins, two of them have come at 54-hole events (2011 Barclays, 2009 AT&T Pebble Beach National Pro-Am).

'It wouldn't matter if it was 72 or 54 holes. Tomorrow is still the last round and there's 18 holes to play, so got to get the job done,' Johnson said.

Johnson was one of three players who made eagle at No. 18 in Round 2 – so did Matt Kuchar and defending champion Steve Stricker.

After posting 2-under 71 Monday morning, Stricker fought his way into second place with a 6-under 66 in the second round, helped in large part by his chip-in eagle from 67 yards in the 18th fairway, his ninth hole in the afternoon round.

'That was a real turning point for me,' Stricker said. 'Gave me the belief that I could win again.'

Stricker's eagle at the 18th got him to 6 under and in a three-way tie for the lead with Johnson and Brandt Snedeker at the time. Stricker went on to make two more birdies on his back nine – at Nos. 5 and 6 – before settling at 8 under.

Snedeker posted back-to-back 70s Monday and sits T-4 with Keegan Bradley, who battled his way into contention with rounds of 71-69.

'This afternoon I basically hit every green,' Bradley said. 'It was tough (playing 36) but I guess that's what you train for all offseason.'

After sharing the lead in the morning, Watney posted an afternoon even-par 73 and sits at T-7. Wilson, also an 18-hole co-leader, followed his morning round with a second-round 3-over 76 and fell into a tie for 14th.

The field played lift, clean and place in both the first and second rounds Monday because of wet conditions. Officials also moved up several tee boxes and left the greens rolling at 8 1/2 to help ensure they could get in 36 holes.