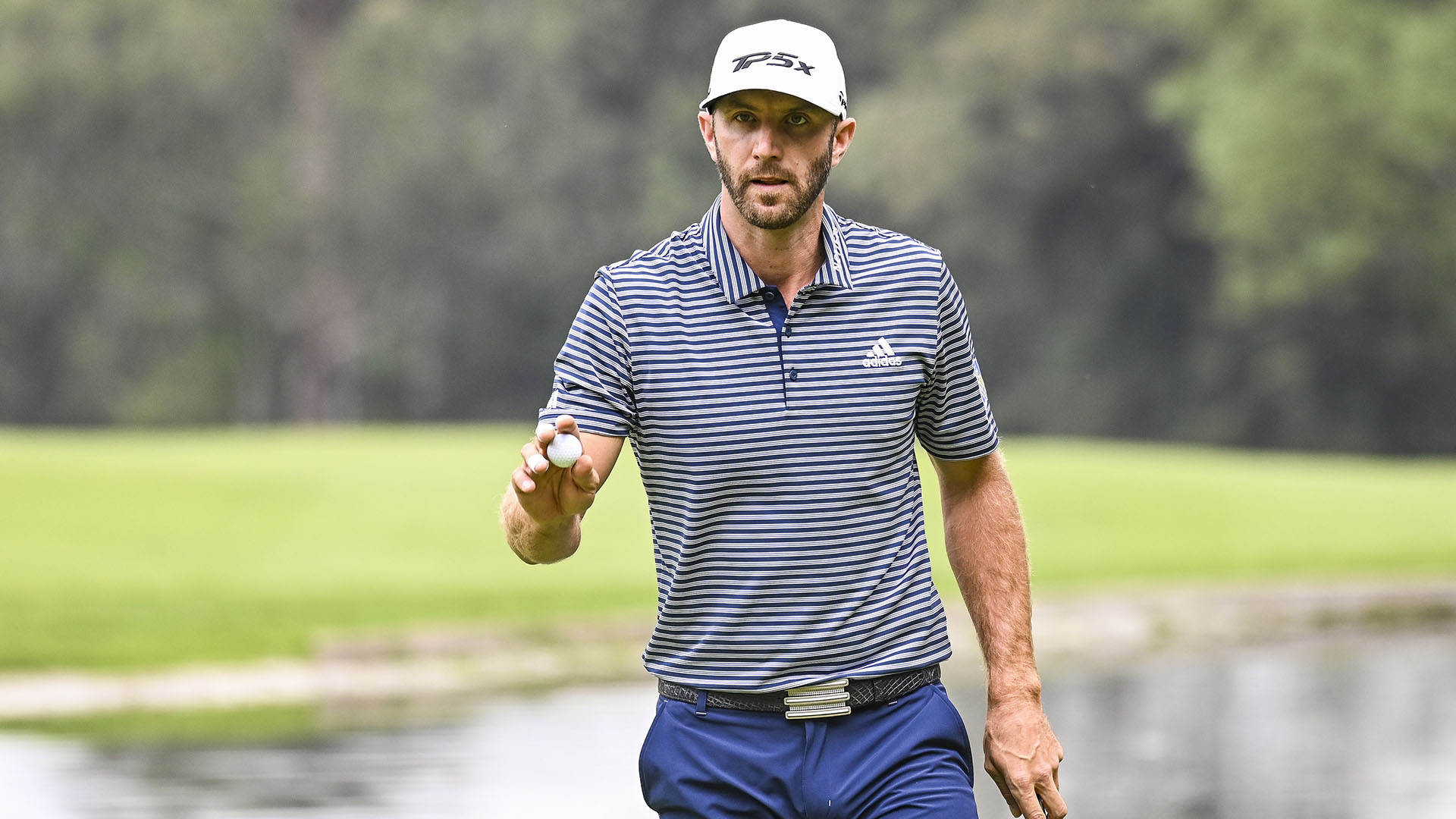 A fellow PGA Tour frat brother once described DJ’s style of play as “caveman golf,” you know “see ball, hit ball.” But then that ignores so much. A peerless work ethic, a tireless devotion to perfecting his craft, a driven desire to win every week he puts a peg in the ground are all glossed over by a stoic demeanor that is often misinterpreted as indifference.

Where some viewed his ability to bounce back after heartbreaking losses at the 2010 PGA Championship and ’15 U.S. Open those closest to him will tell you that perceived nonchalance is actually one of his greatest attributes. A built-in shelter from the demons that naturally manifest themselves after more than a decade in the salt mines is exactly the type of trait you would want in a champion.

In victory or defeat the audio is always the same – swinging it well, putting well, not making any mistakes. But then when you’re playing like DJ did at the WGC-Mexico Championship there’s no reason to dig any deeper.

Johnson’s 20th Tour victory was a work of art, a statistical masterpiece that speaks directly to the 34-year-old’s unique skillset.

Hyperbole is always an easy outlet in victory but Johnson’s performance at Club de Golf Chapultepec can’t be overstated.

Following opening rounds of 64-67-66 he rolled into the final day four strokes clear of the field. He led the field in greens hit in regulation, strokes gained: putting and was second in scrambling. But the most convincing testament to DJ’s dominance was how effortlessly he made it all look.

Rory McIlroy began an overcast Sunday alone in second place and birdied four of his last five holes for a closing loop of 31 and his fourth consecutive top-10 finish on Tour ... and still lost ground on the would-be king.

“No contest. Especially here. His drives are going 380 down the middle of the fairway and he's holing most of the putts he looks at,” said McIlroy, who closed with a 67 to finish runner-up. “I think I played pretty well this week. And maybe other years it might have been better and I might have been able to win.”

McIlroy has seen similar performances in his career but normally it’s the Northern Irishman emasculating the field like he did at the 2012 PGA Championship at Kiawah Island when he laid an eight-stroke wallop on the field.

Johnson wasn’t perfect in Mexico City, but he was as close as anyone has come since perhaps Tiger Woods won the 2000 U.S. Open by 15 shots.

After starting the final day with a commanding lead his advantage was cut to two shots when he bogeyed the par-3 third hole, his only bogey of the week although he did add a surreal double bogey-6 on the 10th hole on Saturday. Things became genuinely tense when his drive at the fifth hole bounded down a hill and his golf ball ended up behind a tree.

Utterly handcuffed by his lie, Johnson was given a favorable ruling away from a cart path that afforded him a shot to the green and he managed to make an unlikely par.

“The only way I could play was back to the left. There wasn't another option,” Johnson said. “I told the rules official, ‘Look, even if I try to get really close to this ball, I'm still standing on the cart path.’ He agreed with me and I got relief.”

Fortune favored Johnson again on the next hole when McIlroy’s drive ended up in a similar spot behind a tree, and near a cart path, but wasn’t given relief and made bogey.

By the turn Johnson’s lead had been stretched to five strokes and he played a perfect closing nine with five birdies to put the title out of reach.

For a player who is often over-simplified as a bomber his second victory at Chapultepec is evidence to the contrary. At nearly 8,000 feet above sea level the thin air annually creates distance control problems and yet the math – which can resemble long multiplication – seems to be a tunnel vision elixir for Johnson.

“It's difficult and you definitely have to focus on every single shot, just because with the elevation and calculating the numbers and then the wind was blowing this week, too,” he said. “There was a lot of calculations going on.”

The dogma that defines DJ simply doesn’t withstand scrutiny. Where the world sees indifference his actions, if not his persona, paint a vastly different picture. Asked once to describe Johnson, his swing coach Butch Harmon went to an old adage of the duck on a pond, placid for those watching from afar but under the water line paddling wildly.

“You wouldn't think he's trying to win his 20th PGA Tour event,” McIlroy figured. “He just looks like he's playing another round of golf at The Bear's Club at home [in south Florida].”

But his sixth World Golf Championship victory wasn’t just a casual round. Johnson’s 20th Tour triumph qualifies him for lifetime membership in three years and moves him into a rare echelon of players.

Asked if he’s ever considered membership to the Hall of Fame Johnson’s answer was predictable.

“No, I haven’t” he deadpanned. “I've still got a long way to go hopefully, and hopefully I've got a bunch more wins to put on my resume before I start thinking about that. Obviously, it would be a great achievement and a great honor to be a part of that. For me it's more trying to win as many golf tournaments as I can.”

Known more for his prodigious drives than his articulate speaking abilities, Hall of Fame blinders probably aren’t a bad idea at this stage in his career. Just imagine his induction speech.

Besides, Johnson has always been more comfortable letting his clubs talk for him. But after 12 consecutive seasons with Tour victories, making him just the seventh player in circuit history to do that, and another dominant performance to add to his resume, he’s on a collision course with the Hall of Fame and much, much more.