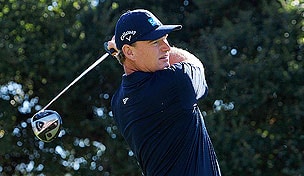 Ernie Els and Tiger Woods arrived at the Frys.com last October as legends down on their luck.

A year later, both have rejuvenated their careers. Only one, however, appears set to return to the Fall Series event.

Els has committed to play in the Frys.com Open at CordeValle Golf Club from Oct. 10-14, the tournament announced Wednesday.

Last year, Els finished T-4 at the event, extending a streak of 19 consecutive seasons with at least one top-10 finish dating back to 1994.

On the other hand, Woods is in talks to compete in a new, unofficial event. The Turkish Airlines World Golf Finals is to be an eight-player event opposite the Frys.com Open, offering the largest a $1.5 million first-place prize in its inaugural year.