Els not feeling the pressure to win Houston 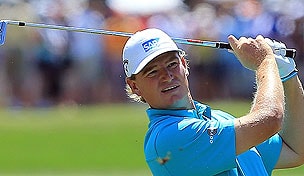 HUMBLE, Texas - Ernie Els is approaching the Houston Open like any other tournament, and not worrying about the bigger prize at stake.

Els must win this week to qualify for next week’s Masters and avoid missing the season’s first major for the first time since 1993. But he’ll consider winning at Redstone a bonus, and is more focused on building on the strong start to his year.

“You can’t go into a week putting pressure on yourself to win to get into another week,” Els said Wednesday. “I just want to have a good week. If I can win, obviously, that would be absolutely wonderful. But my goal here is not to get into the Masters, it’s to play the Shell Houston Open as good as I can.

“If I get into the Masters, that’s great. If I don’t, then I’ve had many Masters that I can look back at, and I’ll get back in there next year.”

The three-time major winner had his chances in recent weeks, earning top-5 finishes at Tampa and Bay Hill. But he missed crucial short putts late in both tournaments and seems resigned to the reality that he won’t be at Augusta next week.

Els isn’t expecting a call between now and Sunday, when the Masters field will be set.

“It is an invitational event,” he said, “and they have their reasons to invite somebody or not, and that’s the sad part. I’ll probably miss it for the first time in 18 or 19 years. My streak will come to an end, unfortunately.

“I can’t blame the Masters people for not inviting me. I’ve put myself in this position by not playing very well.”

The tournament became the run-up event to the Masters in 2007, and organizers have embraced the distinction. The course is manicured to simulate conditions at Augusta, with light rough, fairways mowed toward the tees, shaved mounds and slick greens.

The setup has generated mostly positive feedback among the pros, particularly among international players. This year, the field has 40 players representing 17 countries outside of the United States, both tournament records.

“They really go the extra mile with the details,” said McDowell, playing here for the first time since 2006. “It’s a nice test, without being too difficult.”

Mickelson has played here every year since 2008 and he tied for 35th in 2010, when he won his third Masters. Last year, Mickelson shot 63-65 in the final two rounds to win by three shots, but then didn’t break 70 in four rounds at Augusta and tied for 27th.

Mickelson practiced at Augusta earlier this week and was expected to arrive in Houston on Wednesday. He said after Bay Hill that the smooth, fast greens at Redstone provide a good tuneup for the Masters, but other aspects of the course do not.

“There’s water constantly pinching in the fairways and there’s no chipping areas,” Mickelson said. “You’re either in the bunker, or in water. There are no chipping areas around the course to help you prepare for the Masters, so it’s really not that great.”

Mickelson will play the first two rounds with defending Masters champion Charl Schwartzel and Couples, who played at the University of Houston and draws immense galleries here every year.

The 52-year-old Couples has made 18 consecutive cuts in Houston and earned his last win on the regular tour here in 2003, when the event was played at the nearby members’ course. Couples is coming off a victory on the Champions Tour, but missed the cut in his only other start on the regular tour this year, at Riviera.

“I want to compete, I want to play well,” Couples said. “I don’t want to come and play the Houston Open and feel more pressure, because I’m playing with guys that are better than I am. They hit it better, they play more, they’re better putters and chippers. But I still have the savvy on how to get the ball around.”

Shell has been the tournament’s title sponsor since 1992, the third-longest tenure on tour. The oil company’s current contract runs through 2017.