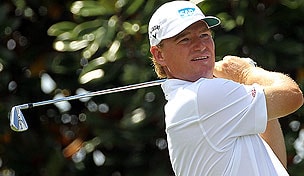 Although the focus last week was on Rory McIlroy and Tiger Woods’ season debuts, there was one global star who has gotten off to a solid start in 2013 despite a significant change on his bag.

Ernie Els, who tied for 39th last week in Abu Dhabi and was 18th in his ’13 debut at the Volvo Golf Champions, begins the new season with a new caddie as his normal looper continues to undergo treatment for what doctors believe are blood clots.

Colin Byrne, a veteran looper who has worked for many top players including Retief Goosen, has stepped in for the South African’s normal caddie Ricci Roberts, who flew to England following last year’s BMW Championship to receive treatment for the leg ailment.

Byrne first worked for the South African at November’s WGC-HSBC Champions and said he is scheduled to be on the bag through March. Els is playing this week’s Qatar Masters and plans to make his PGA Tour debut at the Northern Trust Open in two weeks.