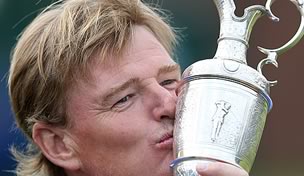 Getty Images
SONOMA, CA - OCTOBER 27: Denis Watson of Zimbabwe lines up a birdie putt on the second hole during the third round of the Charles Schwab Championship Cup at the Sonoma Golf Club October 27, 2007 in Sonoma, California. (Photo by Marc Feldman/Getty Images)  -

A rules debate. A bunker gaffe. A bunch of errant shots.

In the end, though, it was Ernie Els’ storybook finish – and Adam Scott’s incredible collapse – that determined one of the most unlikely Open Championships in history.

Capping a brilliant back-nine 32 at Royal Lytham & St. Annes, Els buried a 15-foot birdie putt on the final hole, and then watched as Scott stumbled home with four consecutive bogeys to steal his second claret jug.

“I’m still numb; it still hasn’t set in,” Els, 42, said. “It will probably take quite a few days because I haven’t been in this position for 10 years, obviously, so it’s just crazy, crazy, crazy getting here.”

Scott, vying for his first major title, was ahead by four shots when he made a birdie putt on the 14th hole, but dropped shots on four consecutive holes – with missed putts, errant irons and wayward drives – to lose in stunning fashion. Tied as he teed off on 18, Scott drove into a fairway bunker, near the lip, and was forced to pitch out sideways. After hitting an iron into the middle of the green, he missed a 12-foot par putt that would have forced a playoff.

Said Els: “I feel for him; I’m numb. Later on it’ll set in that I won this golf tournament, but right now I really feel for my buddy. … I feel very fortunate, but I really feel bad for Adam today.”

Els shot 67-70-68-68 for a 7-under 273 total at Royal Lytham, which has become the big South African’s personal playground over the past two decades. In his three Open appearances there, Els has a win, a second and a T-3.

As he addressed the spectators in the trophy presentation afterward, Els turned to Scott and said, “You’re going to win many of these. You’ve got too much talent.”

Remarkably, Els now has won majors in three decades, and it is his fourth major championship overall. He moved to No. 15 in the Official World Golf Ranking.

Els is the 16th different winner in the past 16 majors, and he became the third player in the last four majors to win with a longer-than-standard-length putter, though his victory ends a streak of nine consecutive first-time winners.

One of the sweetest perks? After failing to qualify for the Masters for the first time in 19 years, Els now has a five-year exemption into the year’s first major.