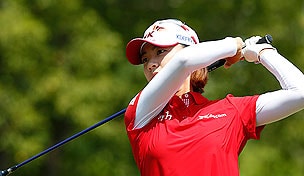 Getty Images
CARLSBAD, CA - MARCH 27: Hee Kyung Seo of South Korea waits to [utt on the second hole during the third round of the Kia Classic Presented by J Golf at La Costa Resort and Spa on March 27, 2010 in Carlsbad, California. (Photo by Stephen Dunn/Getty Images)  -

This week the LPGA plays the first of five majors to be held in 2013, with the winner of the Kraft Nabisco Championship taking a traditional leap into 'Poppie's Pond.' Each week, a panel of experts will offer up their picks from four groups of players based on Golf Channel's new fantasy game, Fantasy Challenge. We will also keep track of their scores and standings. The panel includes: senior writers Rex Hoggard, Randall Mell and Jason Sobel; contributors John Hawkins and Win McMurry; editorial director Jay Coffin; 'Morning Drive' host Gary Williams and staff writer Ryan Lavner. They will also be joined by former 'Saturday Night Live' star Norm Macdonald, who will serve as a celebrity guest throughout the fantasy season.

Group 1: Stacy Lewis: The new No. 1-ranked player in the world is on a roll following her win a couple weeks ago at the RR Donnelly LPGA Founders Cup. This is the lone major championship she has under her belt and I wouldn't be surprised to see her win again, two years after her initial victory.

Group 2: Angela Stanford: While she's not won a major during her career, she has a pretty solid history at the Kraft. She has not finished outside the top 15 here since 2007, with her best finish a tie for third in 2011.

Group 3: Danielle Kang: She missed the cut here in her only start back in 2011, but she's had a solid start to 2013 with a T-19 in Thailand and a T-5 finish at the HSBC Women's Champions in early March.

Group 4: Helen Alfredsson: Her only major championship came here in 1993, but she seems to be ageless with five other top-25 finishes here, as recently as 2009.

Group 2: Beatriz Recari: She began the season with consecutive top-5 finishes in Thailand and Australia, won last month's Kia Classic and was solid at the 2012 Kraft Nabisco (T-26).

Group 3: Jessica Korda: Tough weekend at the Kia Classic (74-75), but otherwise she has been steady this year, including a tie for fourth at the LPGA Founders Cup.

Group 4: Mo Martin: Big finish at the Kia Classic (69) pushed the second-year player into a tie for third. A good week in the California desert seems like the next logical step.

Group 1: Na Yeon Choi: Stacy and Yani get all the pub, but the terifically-nicknamed Big Apple can hold her own with anyone.

Group 3: Jessica Korda: Still young, but with enough talent and experience to seriously contend this week.

Group 4: Dewi Claire Schreefel: Sure, she's a dark horse, but Symetra Tour afficionados have long known about her skill set.