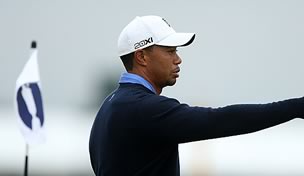 The men compete in their third major of the season at the 141st Open Championship at Royal Lytham & St. Annes. Each week, a panel of experts will offer up their picks from four groups of players based on Golf Channel's new fantasy game, Fantasy Challenge. We will also keep track of their scores and standings. The panel consists of: senior writers Rex Hoggard, Randall Mell and Jason Sobel; contributors John Hawkins and Win McMurry; editorial director Jay Coffin; RotoWorld.com's Rob Bolton; 'Morning Drive' host Gary Williams; and Golf Talk Central contributor Ryan Ballengee.

Group 1: Tiger Woods: Tough to pass up at 8-to-1 – and, let’s be honest, fantasy golf is little more than an each-way bet. His missed cut at The Greenbrier Classic aside he has been as consistent as anyone over the last three months.

Group 2: Zach Johnson: Never easy to win back-to-back starts, particularly if the backend of the one-and-one is a major championship, but the blue-collar champion has been virtually unstoppable since his runner-up showing at the Heritage in the spring.

Group 3: Padraig Harrington: So the two-time Open champion’s form has been less than stellar for some time but his putting finally seems to be coming around and he’s finished in the top 10 in three of his last five European Tour starts.

Group 4: Greg Owen: A world-class ballstriker with a questionable short game, but the slower-than-normal Lytham greens should help mitigate that and he counts the English gem among his most favorite courses.

Group 1: Justin Rose: My pick to win fits the recent major champion profile – major talent without a major win. Yet.

Group 2: Rickie Fowler: Youngster has shown a propensity for strong play at the world’s oldest event.

Group 1: Tiger Woods: I'm not sure he'll win, but I want to make sure I have him on my team when he does.

Group 2: Rickie Fowler: Loved the moxie he showed last year and he's patient as hell in these conditions.

Group 3: Simon Dyson: Tied for ninth last year and has been steady on Euro Tour all of this year.

Group 4: Greg Owen: Hasn't played here since 2006 but he's played better this year than you'd think. Look it up.

Group 1: Tiger Woods: With three wins this year and a chance to regain world No. 1 with a victory as well as inch closer to the magic number 18, Tiger is ready for this week in Lytham. Not sure he's stoppable.

Group2: Francesco Molinari: He takes momentum into Lytham after his playoff loss Sunday on the Castle Stuart links in Scotland. He says he's in the best form of his life, and I believe him.

Group 3: Padraig Harrington: The two-time Open champ comes in great form, with four consecutive top-15s on the PGA Tour, which includes a T-4 at the U.S. Open.

Group 4: Tom Watson: Timeless Tom knows how to face the elements in store this week better than anyone in the field, even if he can't win it at his age I still think he can dazzle us.

Group 2: Sergio Garcia: While I love the overtones of his connection to two-time winner at Royal Lytham & St. Annes, fellow countryman Seve Ballesteros, Garcia has flashed some of his most consistent form across the rota of host courses. Seven top-10s to be precise. This included a T-9 at the 2001 edition at Lytham.

Group 3: Padraig Harrington: A coup in this group. Thanks to a series of changes in his inner circle, the two-time champion of this tournament has seemingly found peace again between his ears. The results prove it – five consecutive top-20s entering this week.

Group 4: Greg Owen: Where better to slap an exclamation point on a strong season than in his homeland? The Brit has chalked up seven top-20s with a pair of top-10s sprinkled in. He’s also had documented success in this major, including a T-23 at Lytham in 2001

Group 1: Lee Westwood: The best ball-striker in the field will not be penalized for being one of the worst putters.

Group 2: Ernie Els: The 2002 Open champion has rounded into the major championship form.

Group 3: Padraig Harrington: In it until the end at The Olympic Club, the two-time Open champion embraces this championship.

Group 4: Bob Estes: The Texan should do well here. He has missed just two British Open cuts since 1995 with four top-20 finishes.