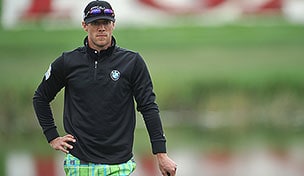 This week the PGA Tour heads in two different directions. While many of the game's biggest stars will contest the season's second WGC event at Doral (our picks for that event can be seen here), a full field will also tackle the Trump International Golf Club in Puerto Rico, picks for which are listed below. Each week, a panel of experts will offer up their picks from four groups of players based on Golf Channel's new fantasy game, Fantasy Challenge. We will also keep track of their scores and standings. The panel includes: senior writers Rex Hoggard, Randall Mell and Jason Sobel; contributors John Hawkins and Win McMurry; editorial director Jay Coffin; 'Morning Drive' host Gary Williams and staff writer Ryan Lavner. They will also be joined by former 'Saturday Night Live' star Norm Macdonald, who will serve as a celebrity guest throughout the fantasy season.

Group 1: Henrik Stenson: We offended Stenson a few weeks back when he didn’t find his way onto our short list of Swedes without a major championship. The look in his eyes suggested he is not happy with that distinction, or us.

Group 2: Paul Casey: The Englishman said in Abu Dhabi earlier this year that he is healthy after a series of injury-plagued seasons, and when he’s close to 100 percent he should still be considered a world-beater.

Group 3: Robert Allenby: One of the game’s top ballstrikers is an easy pick for the Puerto Rico stop which is annually buffeted by gusty winds.

Group 4: Paul D. Haley II: The Web.com Tour graduate is off to a rough start (he’s 0-for-4 in cuts made) but should enjoy a shift to a warmer climate. His best finishes on the secondary circuit last year came in Chile (first) and Mexico (second). It should also be noted he won his only event in 2012 (Chile) 52 weeks ago.

Group 1: Graham DeLaet: T-9 is his number. He's coming off a T-9 at the Honda Classic, his second T-9 this year, with the same finish at the Farmers Insurance Open, and he finished T-9 last year in Puerto Rico.

Group 2: Robert Streb: He tied for 18th this past week in Palm Beach Gardens and also has a T-16 on his resume this year in the desert.

Group 3: Erik Compton: He was a big story at the Honda with his tie for fourth and while he doesn't have great results in his four previous starts here, he's worth the bet.

Group 1: Graham DeLaet: Starting to play some of the best golf of his career, which should serve him well on this big ballpark.

Group 2: Patrick Cantlay: Fresh off a Web.com win, this wunderkind should have good vibes and a nothing-to-lose attitude.

Group 3: Matt Jones: Played nicely on the weekend at the Honda Classic and could be the first Aussie to win since 2011.

Group 4: Vaughn Taylor: Tempted to go with a young player here, but give me the proven talent in Taylor.

Group 1: Kevin Stadler: Rough weekend at Honda, but his record at Trump International is too much to ignore - two top 10s and a pair of top 20s.

Group 2: Bryce Molder: The best putter on Tour this season, statistically, and has finished in the top 13 in two of his three starts here.

Group 3: Ben Kohles: Up-and-down week kept him out of hte top 40 at Honda, but the kid has a lot of game, as he showed last year on the Web.com circuit.

Group 4: Jordan Spieth: T-22 in his last PGA Tour start, and has a pair of top-7 finishes in two starts on the Web.com Tour this season. Good form.