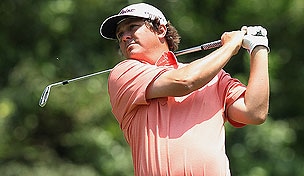 Note: This week the Experts are proud to announce they have been joined by Norm MacDonald. The former 'Saturday Night Live' star has already gotten his fantasy golf season off to a hot start in 2013, and will continue to provide his picks for Golf Channel Fantasy Challenge participants throughout the year.

This week the focus of the fantasy world is split. Our experts share their picks for the European Tour's Omega Dubai Desert Classic here, while their picks for the Waste Management Phoenix Open are below. Each week, a panel of experts will offer up their picks from four groups of players based on Golf Channel's new fantasy game, Fantasy Challenge. We will also keep track of their scores and standings. The panel includes: senior writers Rex Hoggard, Randall Mell and Jason Sobel; contributors John Hawkins and Win McMurry; editorial director Jay Coffin; 'Morning Drive' host Gary Williams, staff writer Ryan Lavner and former 'Saturday Night Live' star Norm MacDonald.

Group 1: Jason Dufner: He tied for ninth twice in the desert coming into this week over on the European Tour. Add to that his playoff loss to Mark Wilson in 2011 and that he ranked fourth in proximity to the hole last year and fifth in GIR percentage from 100+ yards. On a course where distance control on approach shots is going to be key, he's my guy.

Group 2: Scott Piercy: I was going to take Vijay until the news came out about the banned substance abuse. Piercy missed the cut last week, but had back-to-back top-15 finishes to start the 2013 season. He finished T-8 here in 2010 and T-6 in 2009.

Group 3: Charles Howell III: He's finished inside the top 10 in all three starts this year and has a track record of stringing together strong finishes, especially during the West Coast swing. He doesn't have all that many dazzling finishes here, but he tied for fourth in 2010 which is enough evidence for me to give him another start on my fantasy roster.

Group 4: Brian Gay: After his win at the Humana Challenge, he took last week off to soak it in and is back out this week in the desert, where he has finished inside the top 25 in four of his last six starts.

Group 1: Rickie Fowler: From last place after Round 1 to a top-10 at Torrey, Fowler found a groove and should be confident entering this week.

Group 2: Robert Garrigus: Big hitters have been known to overpower TPC Scottsdale over the years, and Garrigus is among the biggest hitters around.

Group 3: Jimmy Walker: Keeping with the hot hand, as Walker owns three top-30 finishes this year and a top-five this past week.

Group 1: Jason Dufner: Perhaps it's not the best way to start a season (Hawaii-Abu Dhabi-Qatar-Scottsdale), but the results speak for themselves. Dufner hasn't finished outside the top 20 since September, and he was runner-up at the Phoenix Open in 2011.

Group 2: Nicolas Colsaerts: The 'Muscles from Brussels' got off to a slow start in his first Tour start as a member (T-44 at Torrey Pines), but the Belgian has the game to become a household name in the United States.

Group 3: Y.E. Yang: After a difficult 2012 on Tour, the South Korean found some form late last year playing in Asia and tied for 20th in his 2013 season debut at the Sony Open in Hawaii.

Group 4: Trevor Immelman: The South African finished tied for 12th at TPC Scottsdale last year for his best finish, and has played solid in Arizona in the past (third at the WGC-Accenture Match Play in 2007, just down the road in Tucson).